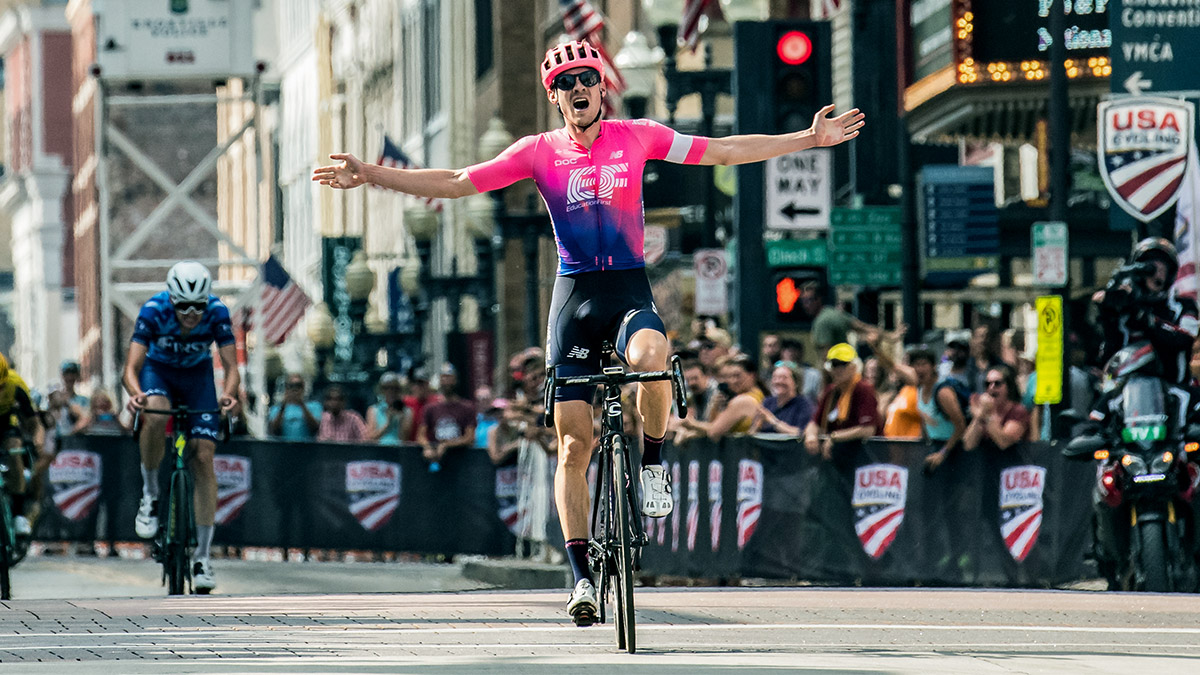 See what it took for Alex Howes to clinch a long-sought victory at the American Road Race National Championships.

The 2019 American National Road Race Championship was held in Knoxville, Tennessee on a demanding course that ran through the heart of the city. In the end, it was Alex Howes who came out on top, after being one of the most consistent riders fighting for the podium in recent years. With a 2nd, 3rd and a 4th place to his name, this was finally his year to take the top step.

The course in Knoxville has been designed for extremely aggressive, difficult-to-control racing. The punchy 2.6km course was completed 15 times, for a total of 190km and over 2500m of climbing. The main ‘obstacles’ included the Sherrod Road climb, which lasted 600m at an average of 11%, and a small kick on the approach to the finish line each lap (Clinch Hill) at 190 meters long and at 8%. Along with these short, steep climbs, the course featured a 1km-long drag designed to sap even more energy from the peloton.

Fighting for the Break

The heat and humidity greeting the riders was to play a big part in the fatigue which would accumulate during the day. The favourites had to use their power and big attacks wisely to avoid burning too many matches early. Alex Howes’ EF Education Team were part of the action early featuring in many of the early moves with the likes of Sean Bennett and Nathan Brown. In the opening 4 laps, Alex averaged 213w, 3.35w/kg with a normalized power of 292w, 4.52w/kg for 1hr 12min and 50.7km. The first main break of the day went clear on lap 5, and it was here that Alex made his first critical move.

The big move during lap 5 resulted in a select group and narrowed down the contenders for the win after just 60km. Initially, it was a 5 man select group that made a massive effort to get clear on the Sherrod Road climb—this was Alex’s fastest time up this climb for the entire race.

The following 7 laps were a constant chase race with multiple groups forming and some bridging across to the leaders. The initial break of 5 gained a maximum advantage of nearly 2 min at the halfway point of the race, but there was still a lot of firepower behind them. It was never going to be a simple case of the leading group riding tempo to the end. With some strong riders starting to bridge to the leading group with 5 laps to go, the race was still wide open.

The middle 7 laps of the race were ridden at a consistent tempo by the leading group which Alex was part of.

It was also noticeable that on the Sherrod road climb the effort was kept at a level, which helped the group maintain composure. Typically, the 590m climb was done around 345-360w, 5.35 – 5.58w/kg by Alex, for an average time of 2:20min. This was around 150w less than during his attack on this climb on lap 5 to make this initial break. As the riders approached the last 40km of racing, the fight for the final selection was imminent—it was during this last 3 laps that Alex made his winning move.

In the last 4 laps the lead group started to break up. Again, it was on the climb that another big effort reduced the leading group. Alex produced his peak 2min power for the day here: A massive 480w, 7.56w/kg for 2min on the Sherrod Road climb. The big anaerobic capacity effort (after already racing for 3 ½ hrs in the heat) proved decisive, as Alex managed to get clear with Stephen Bassett and Neilson Powless.

For the next 10km, the leading trio averaged 43.4ph, even faster than in the fastest lap of the race. This pace was enough to open up a gap of 1min to the select group of chasers that contained pre-race favourites and previous winners.

On the last lap it was clear to see that Alex did not intend to take this to a sprint finish in a group of 3. The last time up the Sherrod Road climb he attacked, again, on the steeper section, doing a 30sec at 462w, 7.28w/kg to try and lose his fellow escapees. This attempt was unsuccessful, and one which Alex almost had to regret later, as both Bassett and Powless made their moves in the final 5km. In particular, Powless attacking with 4km to go put Alex into real difficulty; he even lost touch with the leaders at this point. He did his peak 10sec effort of 697w, 11 w/kg trying to jump onto the wheels covering this attack.

What came next was a display of exceptional grit and willpower. Alex fought very hard to claw his way back to the leaders, and rode the main flat drag at 382w, 6.02w/kg in 1:39min for 1.1km. This was a massive effort so late into a brutal, hot race—but it paid off and Alex gained contact once again.

With 3km to go Bassett made his big move for a solo win on the final small climb of Clinch Hill. With the 8% gradient for 190m starting with nearly 400m to the line, it was a do or die moment for everyone. Again, Howes lost the wheel initially and had to put in a desperate effort to stay within striking distance of Bassett, who had a small gap over the other two. On the final time up this small climb Alex produced 576w, 8.93w/kg for 30sec—after 4 ½ hrs of hard racing. Again, this big 30sec effort was enough to get back onto the wheel of Bassett with just 150m to the line as the road started to flatten.

Ultimately, Alex was able to hold his speed through the final left-hand corner to the line, then maintain his pace to open up a small gap, which was enough to take him to the finish and a well-deserved victory in the American National Championships.

About Stephen Gallagher
Dig Deep Coaching is a global coaching company that works with athletes of all levels across the following disciplines: road, track, cyclocross, MTB and triathlon. Whether you are taking part in your first ever gran fondo or aiming to compete in the professional peloton, Dig Deep Coaching can help you out. Get in touch via email or follow Dig Deep Coaching at Facebook Twitter and Instagram Sign up to our Mailing list and get 3 FREE crucial Sportive workouts and much more Training and Racing information. Register HERE
Visit Stephen Gallagher's Coach Profile
#CYCLING#ROAD