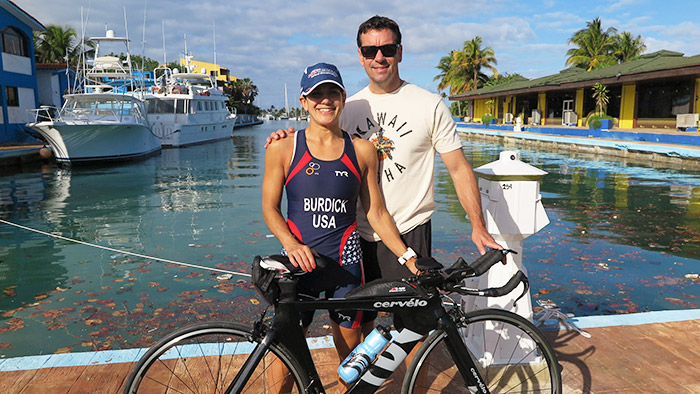 An American Athlete In Cuba: Lessons Learned From a Destination Race Gone Wrong

When a once-in-a-lifetime destination race went off the rails due to illness, Coach Allie Burdick learned some vital lessons about how to roll with the punches in Havana.

As soon as I opened my eyes on race morning, I knew something was very wrong. I had a few dizzy spells the previous day that I chalked up to the excitement of traveling to Cuba for the ultimate destination race. However, I’d also been fighting off a nagging head cold that was worsened by the flight and then pre-race ocean swim.

But now, my rented room in Havana appeared to be spinning out of control while I lay motionless in bed. I managed to sit upright but the room refused to right itself and instead tilted and swayed, negating any chance of focusing. Very slowly, I crawled to the bathroom and, sitting on the cold floor, managed to pull on my racing kit and visor. I was determined to make it to the triathlon I had been dreaming about for the past six months. I was desperate for a miracle that would never come.

The idea of racing the Havana Triathlon was born several months prior when I realized it was the perfect way for my family to finally visit my father’s birthplace. My dad was the youngest son born to wealthy Cuban parents in the summer of 1950. A short 11 years later their beautiful life in Havana became unrecognizable, permeated by the Castro regime, whose militia threatened to seize my grandfather’s business, the family’s assets—and their home.

My grandparents made a brave decision in 1961 to escape, via airplane, piloted by a family friend and confidant named Nelson. Approval of the trip by the Cuban government was made under the guise of business travel for my grandfather, Nelson and my grandmother. Since my father’s young presence would not have been explainable, he was forced to hide inside an equipment container until the plane took off.

Leading up to the day of their escape, my father would practice being silent and still inside this repurposed container, until it was finally time for the real thing. Somehow, after flying a little further and further off course undetected, they landed safely in Key West in November 1961. They eventually made a life, becoming American citizens and settling in Connecticut, where we still live today.

It was because of my dad’s history that we needed to make this return trip to to Cuba with him, 56 years later. Unfortunately, Americans are still unable to travel to Cuba as tourists and so, when I heard about the Havana Triathlon, I was more than happy to secure a “sports” visa and several other “spectator” visas for my extended family. Little did I know, none of my racing plans would come to fruition.

On race morning, after realizing my nausea and vertigo were only getting worse and I could barely walk let alone swim, bike and run, I made my way back to bed instead of to the start line. I was devastated I would not be able to participate in the destination race I had trained for, planned out and envisioned for so long. However, up on reflection I know that I definitely made the right decision and learned valuable lessons from what transpired.

If you’re planning a destination race outside of the United States (or to Cuba specifically), here is how you can learn from my mistakes:

Racing Outside the United States

Prior to leaving for Cuba I had a nagging head cold but it wasn’t preventing me from training so I didn’t bother going to the doctor. Upon returning, I was diagnosed with a sinus infection which spread into my ear canal due to the flight and pre-race swim, causing the vertigo I experienced on race morning. Had I gone to the doctor before I left, I would have had the antibiotics I needed and would be writing a race recap instead of a cautionary tale.

I’m talking about legal substances of course! Although I was unable to race, my stepmom had packed ear drops and I had some sinus medication, the combination of which had me bed bound for only one day and I was still able to enjoy the my week long Cuban adventure. Pack a few types of over-the-counter medications so you can treat yourself easily without having to find a drug store filled with likely unknown brands.

Be Mentally Prepared for the Unexpected

I have raced all over the country and the world and this was a first! I’m continually working on my mental game during a race, but I never thought about preparing myself if I was unable to race. Trust me on this, have a backup plan or something else you’re really looking forward to doing while you’re at your destination.

Being there for my dad and with my entire family took the sting out of not being able to race and I eventually rode my bike on the famous Malecón, albeit not toward a finish line.

Traveling to and Racing in Cuba

Use A Recommended Travel Agency

The agency that worked with the Havana Triathlon helped my entire family secure visas, make plane reservations, book the home we stayed in and our transportation while there. This was no easy feat as you have to consider bike transport as well. If you know anything about Cuban cars, you know they are from 1950 and therefore, very small. However, if you plan ahead, you can get a van big enough your precious bike and all your luggage.

Buy or Rent A Bike Bag

Shipment of bikes from the United States to Cuba is not permitted and therefore you will need to make arrangements take have your bike on the plane. Also, be ready to pay for the extra large cargo. I flew Delta and paid $100 to get my bike to Cuba and $150 Euros to get it back to the United States. We were not prepared to pay in Euros at the Havana airport since the Cuban currency is CUCs and we had to convert as many Euros as possible last minute. Of course there was a currency exchange inside the terminal, but it would have saved a lot of time if we had been prepared.

Without my Spanish speaking father it would have been very difficult to even locate the race registration and bike check-in, not to mention our everyday travels, food ordering and constant interactions with the Cuban people. Nothing concerning the race was well marked, there is little to no Wi-Fi access, and directions are given verbally from pleasant and willing citizens—in Spanish. Everything from registration to bike set up and body numbering was conducted by Spanish speaking race officials and volunteers. Other bilingual triathletes were helpful in this endeavor but, if you can, don’t rely on the kindness of English speaking participants.

Yes, that’s right, there are two separate transition areas during the race and you are given three bags in which to separate your racing gear. Transition one is near the start and where you rack your bike. Your cycling shoes, helmet and any other items needed for the bike portion are put in the bag provided marked “bike” and you are instructed to hang the bag from your aerobars. Transition two is near the finish line (at the American Embassy) and all “run” bags are transported from T1 to T2  by a race official with your running shoes, bib belt/number, hat, etc. The third bag is for any post-race food or belongings (like a room key) you may need and is marked “finish.”

Bring Toilet Paper and Carry It With You

Although we had no problem getting toilet paper at our rental house, it was rare to find it in a public bathroom. You either had to bring your own (I had three travel rolls in my bag at all times) or it was rationed out to you by an attendant. And, the one square they give you is definitely not in proportion to the amount of soap and water you need for your hands afterward, which was also very limited. Do yourself a favor and pack toilet paper and soap!

No matter where your destination race might be, it pays to plan ahead, pack some necessities and get in the right frame of mind to be ready for anything.

About Allie Burdick
Allie is a freelance writer, competitor and twin mom. Her work has appeared in Runner’s World, Women’s Running and ESPNW. On her blog - VitaTrain4Life.com - she chronicles her life as a triathlete and hopes her successes and failures help motivate and inspire others, even the over-40 crowd she somehow found herself in!
#TRIATHLON