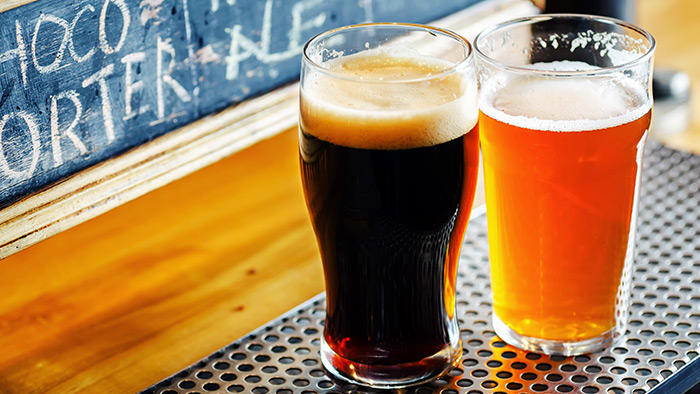 Alcohol can alter your metabolism and derail your training efforts, however, tis’ the season, and as such here are eight tips to follow to keep your merriment from expanding your waistline.

While I definitely don’t endorse binge drinking, the odd boozy night is inevitable, even for the most serious of athletes. (In fact, studies suggest that athletes are more likely than the general population to drink alcohol to excess). But, how can you enjoy a few drinks while minimizing the impact on your waistline?

Before I cover some damage limitation tips, let’s look at some of the reasons why drinking large amounts of alcohol can significantly increase the chance of gaining fat:

1. It alters your metabolism

When you consume alcohol, your digestive system prioritizes its metabolism since you cannot store it and it’s effectively toxic to your body. This preferential treatment slams the breaks on protein, carb and fat metabolism, meaning these nutrients (especially fats) are more likely to end up stored than used as fuel.

2. It affects your appetite and can lead to poor food choices

One of the better known side effects of alcohol consumption is a loss of inhibition. Combine that with the potential for alcohol to increase appetite, and the likely proximity to high-calorie, very palatable food (pizza and nachos anyone?), and you have a recipe for disaster for any health-conscious drinker!

It’s not just the decision to indulge in the first place that’s affected, but the amount of food we end up eating too. And that preferential metabolism of alcohol in your system means those calories from late night feeds are more likely to end up stored as fat.

Large alcohol intake impairs sleep quality and the associated reduced sleep hours (because you’re often partying until the early hours) results in a reduction in lower body power output the morning after a drinking session. In other words, it leaves you feeling pretty rough the next day, which can cause your activity levels and energy expenditure to plummet.

Combine this with a tendency to combat hangovers with lots of junk food and you can expand the fattening effects of a night out to the following day.

How to minimize the effects of drinking on weight gain

Here are a few tactics to employ to minimise the effects of your next big night out:

Of the three macronutrients (proteins, carbs and fats), dietary fats are most likely to be stored as new fat tissue when you drink alcohol. Therefore, reducing your fat intake on the day of a night out can lessen alcohol’s fat storing propensity.

Fill up on meals made up of lean protein and veggies

As well as being low in fat, meals high in lean protein and vegetables tend to be inherently low in calories and are great at making us feel full (and thus less likely to graze on unhealthy foods when drinking). This means your calorie intake prior to boozing will be relatively low.

Since your body doesn’t tend to store a great deal of fat unless you consume more calories than you burn, managing your calorie intake through purposefully constructed meals can further limit alcohol-associated fat gain.

Leave a prepared snack or go straight to bed

If you’re the type of person who finds it hard to turn down junk food at the end of the night—either from a fast-food joint or your own fridge—before heading out, try leaving yourself some tasty but healthy food to snack on when you get home.

This would ideally be low in calories, high in protein and veg-based, perhaps some leftovers from your earlier meal. Having this option might make you less likely to opt for junk food when those late cravings kick in.

Alternatively, try getting into the routine of heading straight for bed rather than the kitchen at the end of the night. Though alcohol worsens sleep quality, it does help you fall asleep quicker. So, once you hit the hay you’ll soon be asleep, hunger gone and you’ll wake up with a few less calories in you (albeit likely with a killer headache).

No form of alcohol is healthy when consumed in excess. However, as alluded to earlier, less than 5 percent of the calories from alcohol actually end up stored as fat. The rest is urgently burned off and eliminated due to its toxicity.

With this in mind, opting for drinks like spirits and dry wines, which contain mostly alcohol and very little else makes sense on paper. Other drinks like beers, ciders, “alcopops,” sweet wines and cocktails all contain additional (non-alcoholic) calories, mostly from carbohydrates.

An average pint of lager, for example, contains 10g to 15g of carbohydrates. Ciders can have up to four times that amount and the sky’s the limit when it comes to some cocktails.

With that said, a case can be made for drinks other than spirits and dry wines. This all depends on how you tolerate certain drinks.

For some, the strength of spirits means that hitting the hard stuff thinking it might be “healthier,” comes with a strong risk of getting really drunk and drinking way more than usual. Not to mention not giving a second thought to a large kebab with cheesy chips.

Know what works best for you and stick with that.

To find out more about the calorie and nutritional contents of different drinks, check out www.drinkaware.co.uk or www.getdrunknotfat.com.

This is a simple one. Avoid regular soft drinks and fruit juices if you’re having mixers with spirits. Over the course of a night these can add a huge amount of extra calories (especially sugar), which you could really do without.

Instead, go for soda water and lime or a slimline tonic. If you have to have soft drinks like coke or lemonade, opt for diet/zero varieties.

As I mentioned before, your body only tends to store fat effectively when you’re in a calorie surplus, so increasing your calorie expenditure by training on the day of your night out can help minimize your booze-induced calorie surplus and the associated fat gain.

It’s important to note that large alcohol intakes have been shown to significantly impair recovery and adaptation processes, so don’t count on these sessions to provide any major performance gains!

Also, make sure you properly rehydrate after any exercise. Since alcohol can cause dehydration, it’s not a good idea to compound this by starting your night out dehydrated.

Drinking a stronger electrolyte drink can help you rehydrate quickly and also help you “preload” on sodium/fluids before you head to the pub, helping you stay hydrated for longer when the vino starts to flow.

Throwing some shapes will significantly add to your energy expenditure and tip the calories in/calories out scales a little more in your favor. An hour on the dance floor can easily equate to a few hundred calories burned!

Plan for the day after

As mentioned, bad habits the day after a boozy night can be a major contributor to the associated fat gain. These tips might not be particularly appealing the morning after the night before but your body will thank you in the long run:

Of course, it’s not just alcohol’s impact on your waistline that you might consider when deciding whether to let yourself go once in a while. You’ll probably want to consider whether this’ll have a negative impact on any gains made in training you’re doing in the days before your night out.

On that front, a recent study found that alcohol consumption reduces muscle protein synthesis following a bout of concurrent exercise. This occurred even though the protein was ingested with the alcohol. The researchers’ conclusion was that alcohol ingestion suppresses the anabolic response in your muscles and may therefore impair recovery and adaptation to training.

No big surprises there to be honest, but it does suggest that, if you’re looking to make big strides forward through your off-season training, you should keep the big nights out to a minimum.

What I would say is that these studies tend to assess the impact of “binge-drinking” which can involve an intake of 1 gram of alcohol per kg of body weight. That’s three and half pints of beer or about four glasses of medium white wine for someone weighing 80kg, which for many of us would constitute a reasonable night out. The effects of the odd bottle of beer or glass of wine with dinner are less clearcut and are likely to be negligible.

Have fun and be sensible(ish).

About Jack Wilson
Jack Wilson is the Head of Sport & Exercise Science at the Porsche Human Performance Centre at the Silverstone Circuit in the U.K. PHP offer a range of physiological testing, training and nutrition services from their state-of-the-art sports science lab. Their clients include a long list of elite motorsport and endurance athletes.
#DAILY-NUTRITION#NUTRITION