The Power Duration Model is one of the most powerful charts found in WKO4. Here, co-developers Tim Cusick and Hunter Allen explain four ways for you to use the PDM to focus your training.

One of the new tools featured in WKO4 is the Power Duration Model (PDM). The PDM is an estimate of the relationship between time to exhaustion and work rate during both anaerobic and aerobic exercise. The main benefit of the PDM is having a robust mathematical description of your power-duration relationship. This provides quantitative insight into your unique abilities and paves the way for other useful analyses.

Why utilize a model to consider training and racing protocols? Endurance performance is limited by a number of factors, mostly oxygen transport, energy consumption, and neuromuscular power and economy of movement. Understanding how these systems both enable and limit your ability to sustain power over time is imperative to training success.

For training needs, the relationship between time and exhaustion can be divided into four groups according to dominant metabolism, which supplies energy to muscles:

Power Duration models help us understand not only the overall relationship between time and power exhaustion but also how to prescribe training plans and workouts to create maximal results and adaptation.

What is a phenotype? It is composite of a rider’s observable physiological characteristics and power individualities such as peak power, time to exhaustion and functional threshold power, expressed by grouping like individuals of similar traits. In WKO4 cyclists (and soon runners and swimmers) can be divided into four general phenotypes:

These athletes have a larger amount of fast-twitch muscle fibers and excellent ability to produce force on the pedals in a very short period of time (less than 30 seconds). They can be “explosive,” with incredible peak wattage in the first 5 seconds. A sprinter can also be more of a “diesel” sprinter with the ability to maintain a very high wattage for up to 20-30 seconds.

These athletes have large natural VO2Max power and can produce high watts from roughly 3 to 8 minutes. They typically can produce 120+% of their FTP wattage for 5 minutes, which is above the upper limit for the Coggan Classic Levels for Level 5 (VO2Max).

These athletes possess a fairly even blend of fast-twitch and slow-twitch muscle fibers. They might have a very good sprint (5-15 seconds) and can time trial well for an hour with a high FTP. They perform well in nearly all events; they’re not great in any single one but are always a threat to win. One important thing to remember about all-arounders is that they also have the ability to “change” phenotypes depending on the focus of their training. An all-arounder could spend a year working on his pursuit and become a pursuiter, only to spend the next year working on his climbing and become a time trial/steady stater. This is very common among all-arounders.

These athletes have a large percentage of slow-twitch muscle fibers and a high FTP, typically along with poor neuromuscular power. They can sustain their power output for a long time (more than 30 minutes) and exhibit excellent endurance for many hours. They are excellent in stage races, long rides, time trialing, climbing, and any event that requires a long, hard, sustained effort.

Now that you know the basic phenotypes, you can enhance your understanding of your strengths and weakness through in-depth review of your Power Duration model and comparing yourself against the standards. 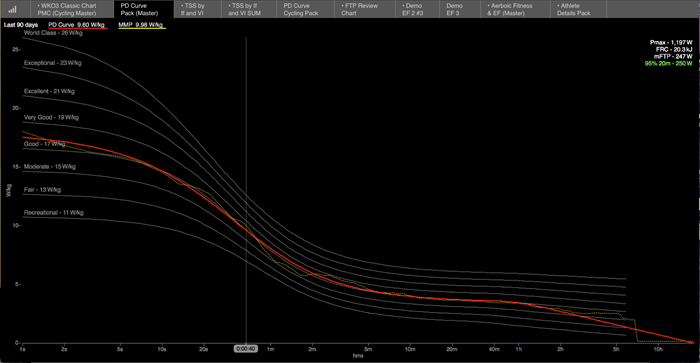 Using this new understanding, you can customize your training to achieve better results. Here are some basic rules to consider:

When considering the focus on your weaknesses, closely monitor the response/adaptation. Some of us can’t improve a weakness no matter how much we focus on it; we are simply a non-adaptor. The new WKO4 Power Duration can play an important role in this tracking by allowing you to better and more quickly monitor adaptation (or lack thereof) to training stimulus. 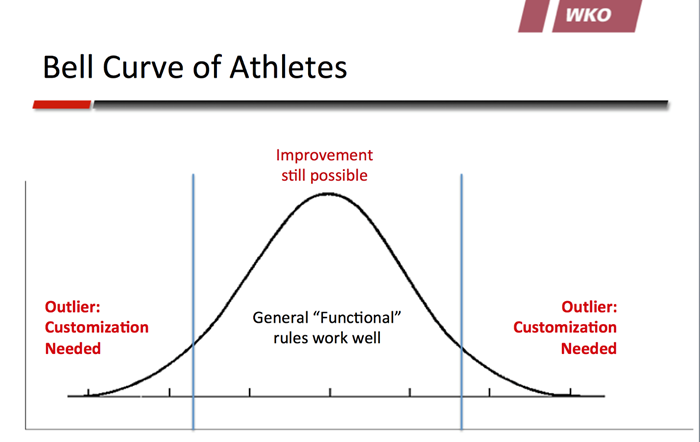 Testing is a burden for many athletes, especially when testing all “physiological zones” as prescribed in the book Training and Racing with a Power Meter. Testing is typically limited by:

The new WKO4 Power Duration model puts a new tool in your toolbox for determining Functional Threshold Power (FTP) and introduces new training metrics to help determine and measure the dose and response mechanism of training. Simply put, the model utilizes different max/hard efforts to establish a power curve of your estimated abilities. Don’t get me wrong here; solid testing is still the best way to identify potential performance. But the model allows for more flexibility in the testing protocols, as it can take a few maximal efforts and estimate out all potential performance.

And WKO4 builds on the classic:

The model’s combined ability to estimate your modeled Functional Threshold Power and track key fitness metrics off a more flexible system of maximal efforts (instead of just traditional testing) will allow you to more efficiently target training levels while tracking micro changes in fitness and performance.

There are a number of variables to consider when designing an endurance training program in order to limit fatigue and optimize performance. Training intensity is a key variable that can be manipulated in such a way that it can lead to either an improvement or a deterioration in performance. Training prescription has historically been based on a familiar protocol: test and determine training levels, utilize these levels till the next test, then repeat step one. While this system has worked well, it is based on the assumption that athletes generally respond the same to each of the training levels. This assumption is in turn based on the idea that all athletes generally maintain the same training level relationship with Functional Threshold Power (FTP). This is not always the case, however. Some riders might respond better to training at FTP and not at all to training at anaerobic capacity, or vice versa.

For example, let’s say Joe Rider was desperate to improve his sprint to beat his archrival, so he spent four of the winter months working on his sprint, lifting weights, and doing plyometrics. His sprint Pmax went from 955 watts to 1027 watts, but his rival’s sprint was still 1200 watts. Fortunately his coach also had him improving his FTP during those four months as well and moved his FTP from 280 watts to 325 watts. When race season came, Joe didn’t have to sprint against his rival; he just dropped him and soloed into the finish for the win.

Like most things, training adaptation falls under a bell curve. A portion of the training population fits well in such a bell curve, but this still leaves two issues. First, what if you don’t fit? What are your options to building workout targets when you are outside the bell curve? Second, even if you fit in the bell curve, is this the most efficient training for you?

The ability to individualize power zones while tracking overall load and adaptation is critical to maximizing your success as an endurance athlete. Utilizing the Power Duration model, WKO4 introduces new individualized training levels that recognize your unique physiology to better determine specific training targets/levels, allowing for a specific, highly-focused training prescription and individualized performance analytics to improve your training efficiency and effectiveness.

This system improves upon the classic idea of general training levels in the following ways:

Specificity and Estimated Changes in Performance for Specific Time Durations

The Specificity Principle states that training must go from highly general training to highly specific training. It also implies that to become better at a particular exercise or skill, you must perform that exercise or skill. To be a good cyclist, you need to train on a bicycle! To be good at something specific in cycling, you need to train that specific area. If you want to become a better time trialist, riding up and down mountains on your time trial bike is not going to help your 40km time. However, riding hard for an hour is not the key to breaking an hour in a 40km time trial, either! Each individual athlete responds differently to training stimulus.

Take a look at the chart below. This athlete has steadily improved over the last six months from roughly 1:40 seconds and beyond. You’ll notice how his Power Duration (PD) curves all cross at about the same point, around 1:40, but after this the curves are dramatically different. Despite the various kinds of training Alvaro has done, including training focused on shorter durations, he really hasn’t been able to impact his ability under 1:40. One could argue that trying to train them is a waste of his time and that he’s better off training longer durations. 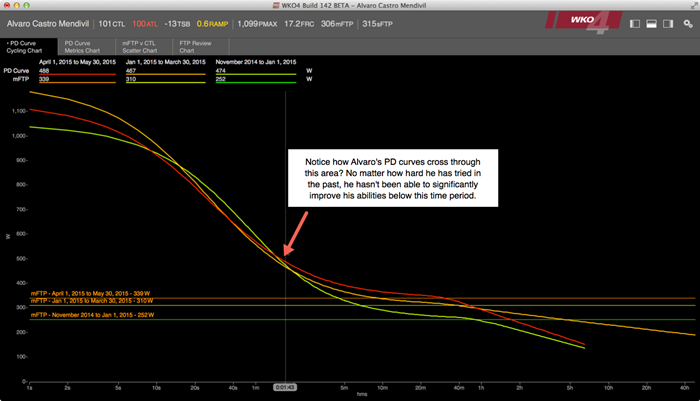 Focusing his training time on longer intervals, however, has earned Alvaro incredible gains. In the next chart below, we can see that he has improved his 14-minute power from 280 watts in November to 358 watts in May, which is an amazing increase: nearly 80 watts! By focusing on intervals from 10 minutes to 45 minutes long, he has maximized his training time, made significant increases in his power output, and enjoyed more success since his races demand high outputs of power, especially in the 10- to 20-minute range. 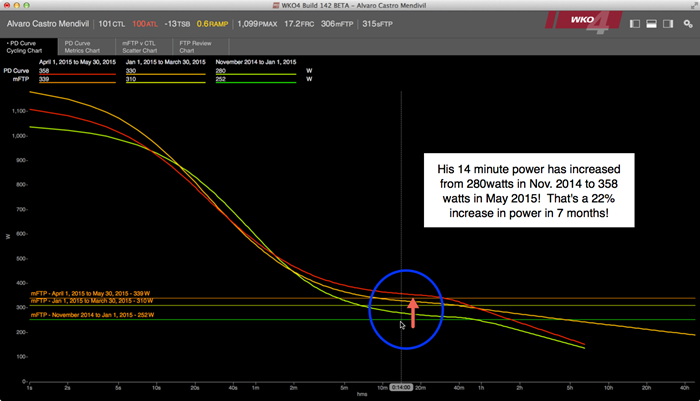 By gaining a better understanding of specific training and its effects on your power duration capability, you can maximize your training time by reducing time spent in areas that simply won’t improve. This insight into each individual’s physiology has been very difficult to learn or understand until now. But now you can load your data into WKO4 and watch the changes in your PD curve throughout your training season to quickly reveal areas of your physiology that are more adaptable than others. By cross-referencing this with the demands of your events, your training becomes more individualized and meaningful. This alone is reason enough to start using the PD curve.

The Power Duration model in WKO4 is only one of many upgrades focused soundly on empowering coaches to get better results for their athletes.