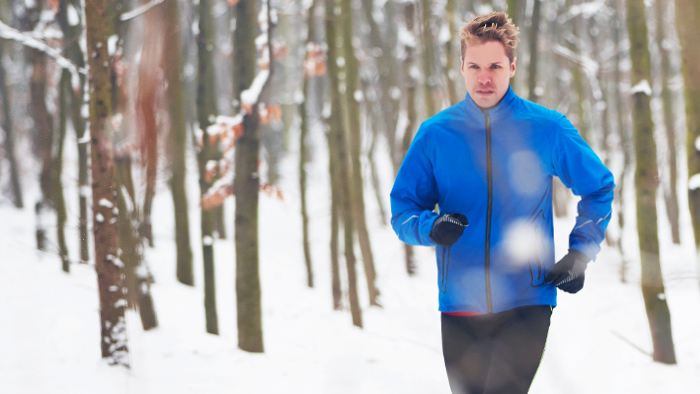 Chilly outside? You’ve still got to keep those fluid levels up. Here are four tips for keeping hydrated during those cold weather training sessions.

Exercising when it’s cold outside is a great way to fight the winter blues, which is common for many endurance athletes who live in cold weather climate areas. Some of my favorite runs happen when it’s below freezing, I love the sense of calm and peace in the air. While this can be great mentally, it’s important to stay well hydrated to ensure you are getting the benefits physically as well. The thought of drinking something cold when it’s cold outside may be make you cringe, but science tells us that hydration during cold weather is critical.

Air during the winter months is generally much drier than during the summer. As you inhale the cold, dry air during an activity, it is warmed and humidified as it passes through your respiratory system. This creates an increase in water loss through your respiratory system, therefore increasing your need to replace fluids during and after activity. The longer the activity, the greater the risk for water loss, creating an increased risk of dehydration. Clothing can also play a role. If you are dressing properly during the winter, you will have a moisture-wicking base layer that will whisk away any moisture on your skin. This is an advantage to feeling warm during your run, but a disadvantage from a hydration standpoint because you don’t feel as sweaty after your run and may not feel the need to re-hydrate. The very best way to ensure proper hydration is to do the following:

Watch for symptoms of dehydration: thirst, unusual fatigue, lightheadedness, headache, dark urine, dry mouth, infrequent urination or an unusually rapid heartbeat. Overdrinking can be an issue as well causing a dangerous condition called hyponatremia. Symptoms of overdrinking include sloshing, nausea and dizziness. To dial in your hydration plan, consult a registered dietitian. They will not only help you figure out what to drink during training and on race day, but can assist with proper fueling as well.

About Caryn Kusleika, RD
Caryn Kusleika is a Registered Dietitian Nutritionist and USAT Level One Coach and is excited to prepare athletes by helping them set goals so they can have great energy throughout training and on race day to perform at their best. She provides nutrition information and coaching to endurance athletes though her business, High Octane Wellness. She knows first-hand the results that great nutrition and coaching can provide because she has competed in various endurance events across the Midwest.