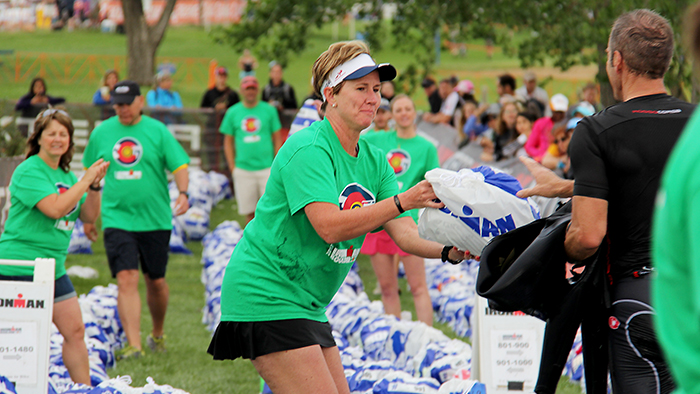 Many people are involved in helping you cross that finish line. Here are three stories that highlight the different ways race day staff and volunteers have saved the day.

So frequently, athletes have spent so much time and energy prepping for a race, the fact that somebody had to set up the race course, transition area, etc., before they even park to unload their bike is lost on them. I preach thanking the volunteers, smiling at the traffic controlling police, never yelling at one regardless of the frustrations of your day.

Although the following situations may not specifically have arisen on your race day—yet—you never know when old man Bad Luck will rear his ugly head and only through the kindness of a race volunteer will you have any shot of ever seeing the finish line.

No shoes, no service

One Kona athlete was having a pretty good day. The swim went well, and while the transition area was crowded, she was able to quickly change and head toward her bike.

Once there, she was horrified to find that contrary to what she’d remembered, she had not left her bike shoes on the pedals of her bike like she had planned—but rather they were back in the hotel room!

Almost frantic, she pushed her bike across the compound over to the swim-to-bike bag rack area she’d just left where she met volunteer director Bill Stockton. “What can I do, my shoes are in my hotel room?!” As an afterthought she offered, “and there’s a chance my husband is too.”

Without hesitation, Bill, having helped distraught athletes in the past, gave her his cell phone, instructed her to call her husband and have him bring the shoes down to the race office. Once there, he gave them to a specific race volunteer.

The husband did as he was instructed, and in less than 10 minutes, the shoes were brought to the bag rack and Bill handed them over to her. Like the famed baseball triple play combination of Tinkers to Evers to Chance, Bill made the handoff to the racer who gave him the biggest, most profuse thanks, and was off on Palani Road in a flash grinning from ear to ear.

Another athlete we’ll call #473, finished the swim. Smiling. Not the fastest in the water but he finished well under the 2 hour 20 minute IRONMAN swim cut off, even though most of the field preceded him out of the Pacific.

Following a quick shower, he made quick progress reaching the bag area to fetch his T1 bag and bike gear. However, much to his shock, no bag!

Like a crazy man, he ran to the men’s changing area and asked if the staff could see if any of the other recent finishers might have bag #473 by accident. No one present seemed to have it. At that point, more than 1,800 men and women had already been through the changing tents, each leaving a T1 bag as proof they were out of the water and safe, and a mountain of used T1 bags sat at the end of the changing tent.

Immediately, a gang of volunteers rifled through the bag mountain and—amazingly— they found #473. But when they opened it, they discovered only a woman’s cap and woman’s goggles.“Those aren’t my things,” lamented the athlete.

Another volunteer came up and looked at the bag, and then the race number stenciled on the athlete’s arm. It was #743; they didn’t match. A quick jog back to the racks easily located bag #743 which was re-introduced to its highly embarrassed owner and off he went.

In IRONMAN and IRONMAN 70.3 events, if you are a regular glasses wearer, you can leave your specs at the head of the swim (usually on a table) and retrieve them as you complete the 2.4 mile swim and head up to transition.

One year an athlete left his specs on the table as he had multiple races previously, but as he crawled out of the water, neither he nor the glasses table attendant could find his spectacles.

The guy didn’t know what to do, but he considered committing to finishing the event without his glasses. He knew it would be challenging at best, particularly on a speeding bike going downhill.

He went to the men’s changing area and mentioned the MIA glasses to the volunteer assisting him with his gear change. This particular gent felt that the competitor deserved a second shot at glasses location “Stay here, I’ll go have a look for them,” the volunteer said before heading off back down to the swim start area.

Making his way the short distance back to the same glasses table, he didn’t seem them either. Not on the ground, not on any of the chairs. He widened his search to some of the surrounding table areas, thinking that perhaps they had been knocked off and placed on a different table at some point by a swimmer.

Although 90 percent blocked by two spare timing chip belts—on a separate table a pair of glasses was spotted. Sure enough, pay dirt! The volunteer grabbed them, slipped through racers and volunteers back to the men’s tent, bestowed the glasses to one very happy athlete just as he was finishing changing into his bike clothes. Thanks were spread all around and, grinning ear to ear, the bespectacled athlete grabbed his bike shoes and bolted for his bike.

About John Post, MD
Dr. Post has a long history with triathlon including 6 Kona finishes and an Orthopedic Surgery practice in Virginia caring for, among others, injured triathletes. He now enjoys giving back to the sport by being a World Championship Transitions volunteer every October. If you find yourself on the pier in Kona, please stop and say hi to “the man in the red hat.”
#INSPIRATION#PERFORMANCE