Our CEO Gear Fisher shares 10 secrets he learned while hanging out with Team Sky at their winter training camp in Mallorca, Spain. 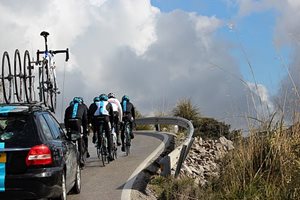 I’ve been a fan of pro cycling since the late eighties, and I’ve always loved learning as much “inside information” as possible. There were even times when I’d wonder what the asphalt was like on famous climbs like Alpe d’Huez, because from the magazine photos, I could swear that European asphalt looked smoother than ours in the U.S. My interest hasn’t waned through the years, and in that spirit, I present ten things that I’ve found curious about being around European pros here in Mallorca, Spain at the Team Sky winter training camp.

There are many more fascinating aspects of pro cycling, but they are mostly top-secret, except for this one: these guys are actually people, just like you and me! They worry about what they eat, how they train, and what their equipment is like.  They don’t have it “figured out” as if there is some perfect way to train and prepare for racing. However, they are blessed with some amazing physiology, motivation and commitment, which are the qualities that make them seem superhuman on the bike. Combined with the uncanny ability to put their bodies through sheer pain and suffering, they are nice guys that love the beauty, challenge and lore of bike racing just like you and me.

TrainingPeaks co-founders Gear Fisher and Dirk Friel will be wrapping up Team Sky training camp in Mallorca, then heading to Italy to work with Team Saxo Bank before hopping a plane to Manchester to meet with British Cycling. For more of Gear’s photos from Mallorca, check out our Facebook album.

About Gear Fisher
Gear Fisher is the CEO and co-founder of TrainingPeaks. He uploaded his first power file in 2001 and continues to drive innovation for all endurance athletes and coaches. He is also the proud owner of a high performance bamboo mountain bike and can be found along the trails of the Front Range. Follow him on Twitter'@gearfisher.
#CYCLING#ROAD