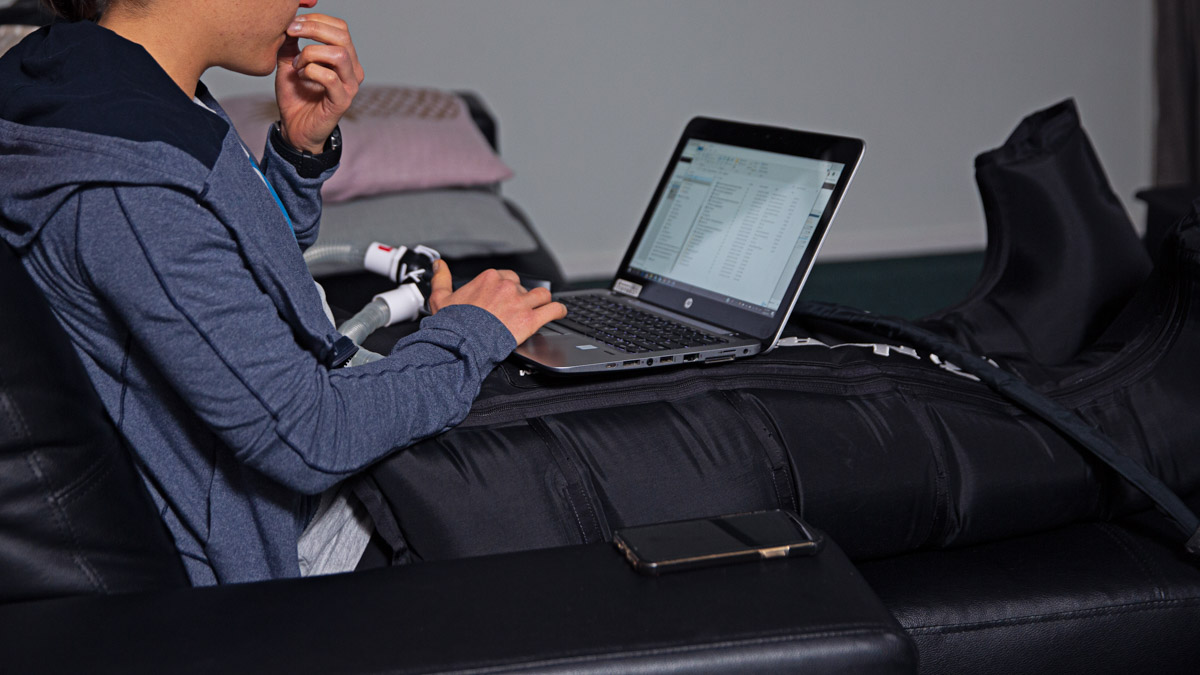 Will a session in a pair of recovery boots make or break your ability to recover after a hard training session? Find out what the science says.

We now understand recovery to be a significant contributor to an athlete’s ability to train and race to their best capabilities. Athletes who embrace recovery as part of their training plan can complete higher intensity workouts and more efficiently consolidate gains for improved overall performance. Recovery aids recently became a booming industry. New products have flooded the market, claiming to offer faster and more effective recovery after training sessions, leading to improved performance.

However, scientific evidence supporting those claims is, for the most part, scant or non-existent. So, we’re left wondering how should a coach advise their athletes on these products. Should your athletes make the investment?

Among the more popular recovery aids are pneumatic compression devices (PCD) (e.g. Normatec, Rapid Reboot). These devices are on the more expensive end, as far as recovery aids go. As a result, athletes will frequently ask their coach about their value and function. Therefore, it’s quite helpful to understand the theory behind how these devices purportedly work, and the evidence supporting the claims made by manufacturers.

How do compression devices work (theoretically)?

PCDs are inflatable garments worn over the legs, with some models including additional garments for the pelvis and arms. PCDs are connected to a controller device that sequentially inflates pockets in the garment to user-specified pressure, and then sequentially deflates them.

There are several theoretical reasons why PCDs enhance recovery. After long efforts at high intensity, there’s some degree of exercise-induced muscle damage at the cellular level. This is accompanied by an influx of fluid into the cells that manifests as swelling. Compression is theorized to be beneficial as it physically forces this added fluid back out of the cells. In doing so, it takes many of the by-products of the muscle damage with it.

The enhanced removal of intracellular fluid and muscle cell metabolites is further theorized to reduce the symptoms of delayed onset muscle soreness (DOMS). DOMS is a major concern for athletes training at high intensity or for prolonged periods, as it can have a significant impact on their ability to perform subsequent workouts. Any recovery aid that decreases DOMS could theoretically be quite beneficial.

In addition, compression is theorized to improve blood flow by reducing venous pooling and improving capillary function. Finally, PCDs are hypothesized to upregulate gene expression for protein synthesis and to enhance other muscle repair processes, though the exact mechanisms by which this occurs are not known.

So, do they actually work?

So what does the research say? PCDs have been studied extensively and there is a dramatic schism between what the marketed theories state and the actual performance benefits.

Some studies demonstrate that the use of PCDs helps clear muscle cell metabolites. Blood lactate levels are higher and metabolite levels are lower after the use of PCDs. Other markers of muscle cell damage, such as creatine kinase and lactate dehydrogenase have shown similar results. It should be noted, however, that these findings are inconsistent. Other studies have found no difference when using PCDs.

Similarly, markers of protein breakdown have occasionally decreased while markers of synthesis have increased after the use of PCDs. But the magnitude of these changes is small and while statistically significant, may not be clinically important.

Unfortunately, while some of the physiological research is positive, consistency in PCD-generated benefits is lacking. Numerous studies on runners and cyclists have failed to show any improvement in the speed or effectiveness of recovery when using PCDs.

Studies focusing on subjective outcomes such as muscle sensitivity to pressure or soreness related to DOMS have shown improvement with PCDs, but neither are associated with any performance benefits to date.

As a coach, it seems as though the science is pretty clear. When advising the budget-conscious athlete, they shouldn’t prioritize PCDs, as they simply do not provide any performance benefits or enhance recovery in any meaningful way. For athletes with less budgetary constraint, PCDs offer some subjective benefits, but won’t translate into any meaningful advantage over those who do not have them.