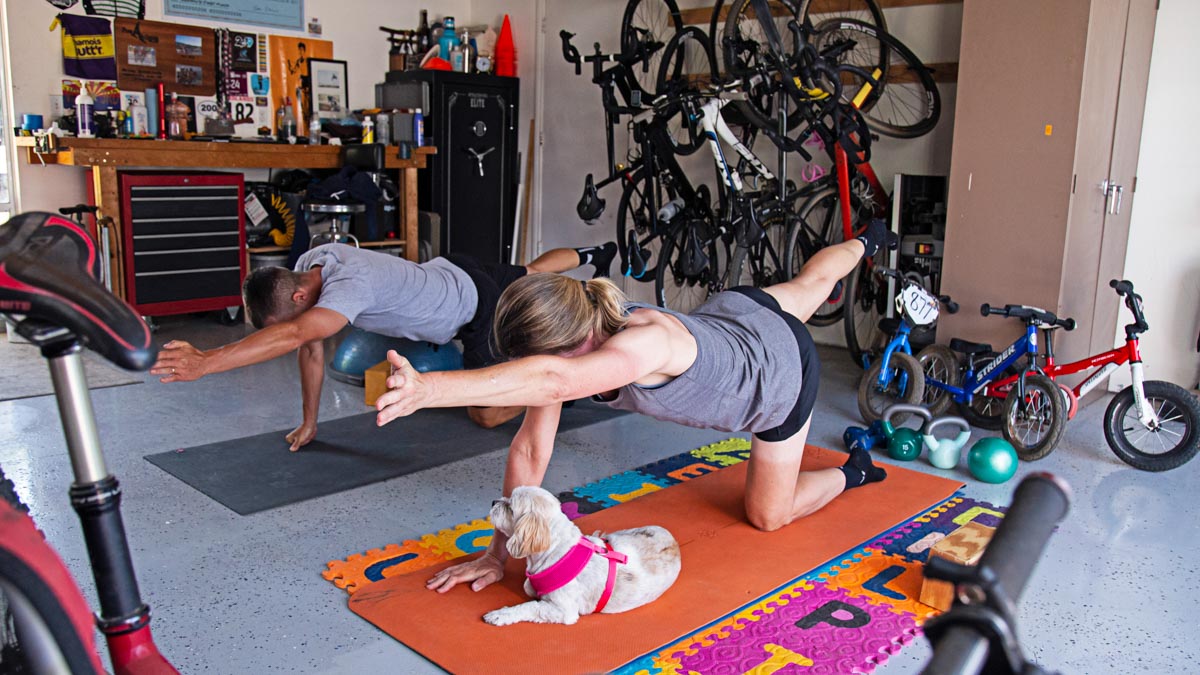 While there aren’t many pluses to COVID-19 impacted endurance sports (see: canceled races, restricted group sessions, and the rest), at least your runners, cyclists and triathletes can still implement your programs on their own and report back remotely. Yet when it comes to coaching strength sessions, things get a little trickier as many gyms are either still shuttered or might be soon, and many companies are selling out of equipment as fast as they can restock it. As such, it’s difficult for your athletes to outfit a home gym. However, there are some ways that you can help them develop strength and power without an Instagram-worthy garage setup. Here are a few pointers to get you started.

A while ago, I was joking with a friend who coaches college athletes about the default pandemic workout being an “SBN” session: something’s better than nothing. While it’s going to be hard for your athletes to increase their maximal strength or power while they’re training at home – unless they have a squat rack, barbell, and plenty of weight plates, they can at least maintain until they have access to better facilities.

We’ll get into some exercises that involve minimal equipment in a moment, but let’s first take aim at those athletes who don’t have any equipment at all at home. This leaves them with one option: using their body weight as resistance in various movements. The benefit here is that while they cannot vary the load due to a lack of extra weight options, there are other dials that you can have them tweak to vary the stimulus. These include volume (total number of reps), duration (how long the session lasts), intensity (how hard they’re pushing themselves), and density (the gaps between exercises and work-to-rest ratio).

If your training group was weightlifting with heavier loads, you might want to keep them in the three to six rep range, but the bonus with bodyweight training is that they can accumulate more volume without the kind of fatigue that they’d get when moving some serious tonnage in the gym. They’ll also have the opportunity to hone their technique with movements that they’d usually be loading. Another benefit of using just bodyweight for resistance is that they won’t need to go through a lengthy warmup with progressively heavier weights.

After a few minutes of aerobic activity to get their muscles warm and their heart and breathing rates elevated, ask your athletes to pick five or six of the following exercises and perform five to seven rounds consisting of 12 to 20 reps of each exercise, with 30 seconds to one minute of each static hold movement like planks and side planks. Start with a two-minute break between rounds but get them to tweak this depending on how taxing they feel the session is. A good barometer is to have them wait until they can take three or four slow nasal breaths before finishing the rest period:

Now let’s look at what your athletes can do if they have one of the most basic pieces of home gym equipment: a kettlebell or dumbbell. Now you’ll be able to provide them with a bit more resistance than they’d get with just their bodyweight, and you open up some other movement archetypes, such as a weighted hip hinge, overhead press, and horizontal pull. You can also start to add in some weight rotation, such as with Russian twists and Turkish get-ups (make sure they check out a good technique video on the latter, as it’s pretty technical), along with weighted carries.

Just like with bodyweight training, you can challenge your clients in different ways when they have either of these implements on hand. The total volume should be a bit lower than you can go with the no-weights sessions but can still be higher than it would be with a fully loaded barbell. Make sure that you have your athletes perform their power movements first, as these are the most taxing on the nervous system and the quality level will decline if they do them in the middle or at the end of a workout. Here are some staple exercises for your athletes to combine in their kettlebell and/or dumbbell sessions:

A good starting point is to do five to 10 reps of three to five exercises, with three to five rounds in total. Since they’ll be subjecting themselves to greater loads, a three-minute break between rounds might be needed. Again, encourage your group to use their breath as a guide for when to begin the next round, or if they’re tracking their heart rate, to wait until it’s back in the orange or green zones before red-lining again.

Your athletes could perform such a session twice a week, or three times if their outdoor training opportunities are curtailed by weather and/or COVID-19 lockdowns. To shake things up, they can intersperse a couple of the bodyweight exercises from the list above amongst their kettlebell and dumbbell movements or switch between sessions – such as doing weighted workouts on Monday and Friday and a bodyweight one on Wednesday. When complemented with whatever distance and interval work you’re prescribing, this should make for a comprehensive program that develops endurance, speed, and power simultaneously.

About Phil White
Phil White is an Emmy-nominated writer and the co-author of The 17 Hour Fast with Dr. Frank Merritt, Waterman 2.0 with Kelly Starrett, and Unplugged with Andy Galpin and Brian Mackenzie. Learn more at www.philwhitebooks.com and follow Phil on Instagram @philwhitebooks.
#COACHING-101#FUNDAMENTALS