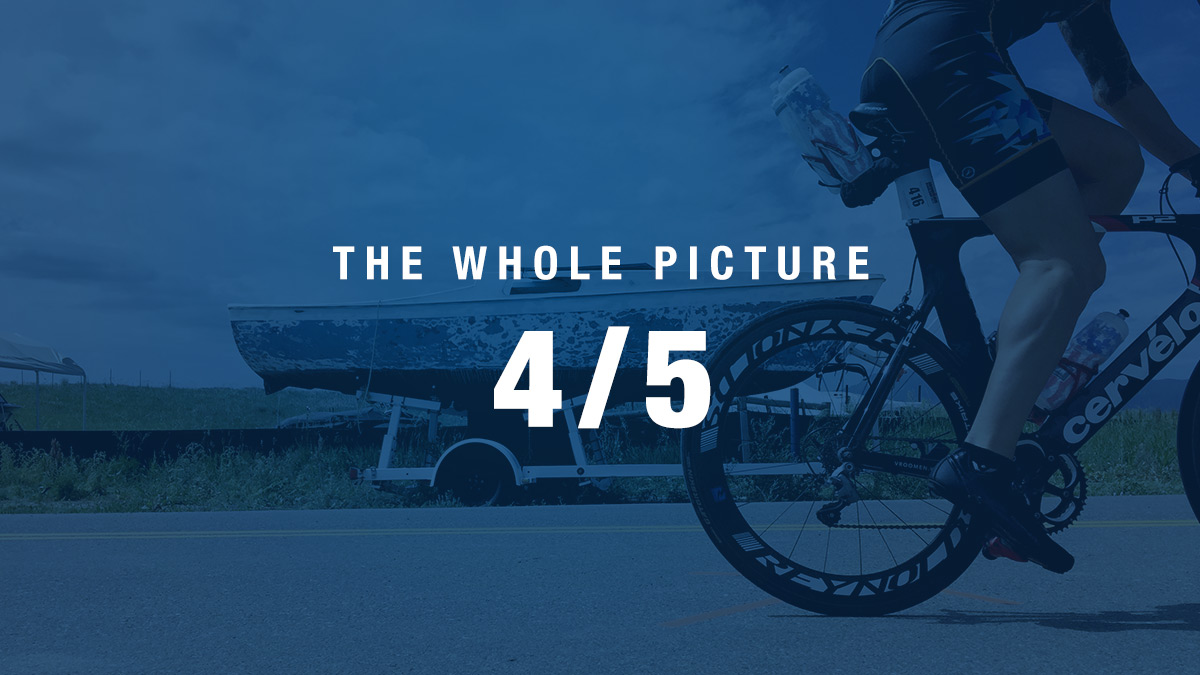 Simon Wegerif explains how nutrition affects total load in the fourth installment of “The Whole Picture.”

This is Part Four of a five-part series on total load, the cumulative training and life stress an athlete experiences while training. Read Part One, Part Two, and Part Three to get the full story.

There are innumerable articles on sports nutrition on the TrainingPeaks blog and elsewhere, but rather than recover that ground, let’s focus on nutritional practices that detract from an athlete’s ability to train hard and recover quickly. As in other articles in this series, we’ll be using heart rate variability (HRV) studies to illustrate how these practices manifest by producing a stress response in the body. HRV is a valuable tool for athletes, as it allows a daily assessment of total stress which can be used to gauge current state of recovery, as well as what kind of training your body is ready for.

Three most common factors that create nutritional stress in athletes are:

Anyone who has exercised for more than a couple of hours in a warm environment may have noticed that their heart rate may continue to increase despite remaining at the same pace or power. Joe Friel describes this phenomenon as “heart rate decoupling,” and one of its causes is reduced stroke volume of the heart brought on by dehydration.

Any upward trend in heart rate while maintaining the same load on the body indicates a shift from parasympathetic to sympathetic dominance and an acute increase in stress. If the stress state brought on by dehydration continues, then recovery is delayed relative to an athlete who is adequately hydrated.

In 2014, researchers from universities in Chile studied the effect of dehydration, both on HRV and on resting metabolic rate (RMR). RMR, or the rate that your body consumes energy in a resting state, is known to stay at a high level after intensive exercise, and the researchers wanted to see whether this was also impacted by dehydration.

Fourteen male college-level athletes were weighed, had their HRV and resting metabolic rate measured, and had their urine tested. The athletes were asked to exercise intensively in 32C (90F) environment with circuit training exercises for one minute bursts with one minute of rest in between for 45 minutes total. The aim of this was to dehydrate the athletes by 3.5 percent of their body weight or about 2.5 kg (5.5 lbs) for an 80 kg (176 lbs) athlete.

The athletes were then split into two equal groups, one of which received 1.5 times the amount of fluid they had lost (rehydration group), while the other group rested in a dehydrated state (dehydration group). They found that:

The decreased HRV may indicate a delayed return to the “rest and digest” state that we need to rebuild and restore the body’s reserves.

The researchers’ recommendation is to consume approximately 150 percent of the fluid lost during exercise to ensure a fully hydrated state and to use electrolyte supplements for extended workouts. This is especially true in a hot environment in order to minimize the dehydration contribution to total load.

Although dehydration would also be the first, and perhaps the only reason, that athletes typically think of for not consuming alcoholic drinks, there are, in fact, several ways in which alcohol adds to the total stress load of the body:

This data shows a minimal impact for the recommended two small drinks per day, but by the time research subjects were consuming twice that amount, HRV was reduced by around 10 percent. Doubling consumption again reduces HRV by a very significant 25 percent compared to consuming no alcohol at all.

There are several adjustments that can help minimize the impact of alcohol on recovery:

Inflammation is the body’s mechanism for managing repair, and therefore, in principle, a good thing. For example, inflammation is necessary for muscle growth as it participates in protein breakdown, removal of damaged muscle fibres, and production of prostaglandins. However, a lot of the time the body is struggling with low grade chronic inflammation that adds to total load.

Inflammation is a stress response driven by the sympathetic nervous system but regulated or “turned down” by the parasympathetic nervous system that we measure with HRV. What does this have to do with nutrition you may ask? Well, take a look at this example of ithlete HRV readings taken by leading HRV researcher Dr. Andrew Flatt during a week when he relaxed his usual healthy diet in favour of high glycaemic, highly processed, and refined foods known to promote inflammation:

As well as significant daily drops in HRV during the week, his overall baseline also reduced without having done any training. Dr. Flatt’s conclusion was that: “Eating foods that promote inflammation in the body creates stress that your body must deal with. In dealing with this stress we reduce our ability to adapt and recover from training.”

Nutritionally, one of the most common factors driving chronic inflammation is an imbalance between Omega-3 and Omega-6 fat sources, with the latter being both more common in a pro-inflammatory processed food diet. The answer could be to increase dietary quantities of Omega-3 fats, preferably from wild fatty fish; farmed fatty fish has very little Omega-3 due to its altered diet. Trans-fats are also known to be pro-inflammatory and are found in foods such as pastries, doughnuts, margarine, and other snack foods.

In this article, we reviewed mechanisms and evidence that nutritional practices common amongst age group athletes create a stress load that the body has to bear in addition to training. This extra load delays recovery and prevents the athlete from training as hard and effectively as they might to gain maximum adaptations and performance.

The good news is that all of these factors are relatively easily managed, and that regular HRV monitoring provides an overall health barometer to help identify what is working.

In the final part of this series, we will be looking at how sleep (or more commonly, the lack of it) contributes to total load in the athlete.

The next article in this five-part series will take a closer look at how sleep contributes to total load.

About Simon Wegerif
Simon Wegerif is a serial entrepreneur, inventor, and biomedical engineer. He was previously an executive with Philips Electronics in the UK and Silicon Valley. Simon is a competitive cyclist and has also completed a number of triathlons including Ironman distance. He created ithlete, the leading, scientifically founded HRV app in 2009 after identifying an opportunity for using HRV in his own training. He is considered an expert on the topic, having read over 1000 papers and frequently consults with industry experts.
#COACHES-CHOICE#PHYSIOLOGY#SCIENCE