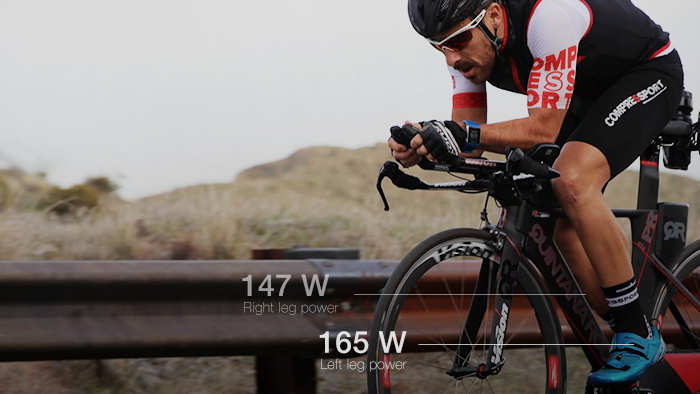 Whether due to injury or biomechanics, pedaling asymmetries can be diagnosed and their treatments monitored by using the powerful analytics of WKO4 software as shown in the following case studies.

The arrival of dual-sided power meters created a new concern for cyclists who do not have a 50/50 (or nearly so) power balance between their legs: How can one achieve the perfect biomechanical symmetry needed for the best cycling performance? Some references seem to indicate that symmetry is the constant of moving exercise (although minor asymmetries are often present in even the most symmetric examples) and is a result of lateral dominance or external mechanical factors such as shims (Ogeta Alday, 2015).

It should be noted that the concept of asymmetry is measurable in several different ways, including mechanical efficiency or smoothness (Gordon, 2002) and newer concepts like GPR (gross power released) and GPA (gross power absorbed) (Allen, 2015). There is no clear consensus as to whether a change in intensity or cadence balances or imbalances the left/right distribution of efforts (Rannama 2015, Sanderson 1990, Carpes 2011, 2016).

Although asymmetry in cycling and its effect on performance are a subject of current study in the scientific community (Bini, 2015 and Carpes 2007, 2010), it is from the perspective of injury risk (Rabin, 2015) that the research more clearly develops the relationship between the adaptation that causes asymmetry (a closed kinetic chain and the symmetrical references between the points supporting it) and the discomfort or injury that in turn results from the asymmetry (Cavanagh, 1986). On the other hand, the variability of the appearance of asymmetry and origin suggests that it can change over time depending on the rider’s fitness, muscle flexibility, etc. (Daly 1976).

Based on this premise, whether corrective or preventive, we assume that  analysis of a cyclist’s asymmetry expressed by kinetics and not only by kinematics (Yanci, 2015) is an excellent method of deepening the scientific knowledge of this area in cycling. Thanks to software like WKO4, complemented with good knowledge and appropriate biomechanical intervention, we hope to shed more light on this type of asymmetry. Through deepening our knowledge and providing measured solutions, we aim for more sustainable improvement in comfort and prevention of injuries, as well as power production.

Asymmetries in cycling are as unique as the cyclist (Smak, 99), but we have gathered several examples that may be catalogued as generic. All metrics have been measured with a power meter and subsequently analyzed in the WKO4 software.

This anatomical asymmetry requires the bones to perform an extreme range of motion that cannot be compensated for by hyperextension of the joints because it exceeds the functional ranges of motion at the hip, knee, and ankle. The recorded left-right balance in this instance is 45/55, mainly due to differences in GPR (tangential and propulsive force) from left to right (148 versus 164). On the other hand, GPA (non-useful force, tangential but in a negative sense) from left to right is practically the same (31 versus 30).

This causes a difference of net force between the left and right legs of 119 watts versus 133 watts, respectively.

In this case, we will try to rehabilitate the GPR of the affected leg, although it may not respond to the classic mechanical treatment of a shim/cleat relocation (Pruitt, 92) due to lack of motor adaptation or incomplete leg rehabilitation (Millor, 2016). However, the ability to provide direct feedback to the rider on the level of symmetry improves the rebalancing process.

CASE 2: Asymmetry due to excessive dorsiflexion of the right ankle

This rider’s right ankle muscles are not able to maintain a consistent motion in the descending phase of the crank when the crank is at 90 degrees, and the leg loses torque as the limb straightens.

The chart above displays data from a two-minute interval at 110% of this rider’s FTP, with ankling increasing with the intensity. Ankling is an erratic motor pattern (dorsiflexion in the extensor phase) that can cause both an overuse of the Achilles tendon and fascia (Burt 2013, Bruke 2003) and a reduction in gross pedaling efficiency (Cannon 2007).

CASE 3: Asymmetrical position of the pelvis on the saddle

Due to the slight asymmetrical position of this rider’s pelvis on the saddle, one leg (in this case the right) produces a greater amount of power in the descending phase, demonstrated here by a left/right balance of 49/51.

The downward torque of the left leg (GPR) is lower than the torque of the right leg (178 left versus 190 right), with no significant difference in motion. When the rider moves to the right, more bodyweight is placed on one leg than on the other, generating a more consolidated point of support on that side, which potentially explains the above example.

GPA is also slightly lower in the left leg than in the right. This is because bending the leg over the hip is more resisted on the right, with the left hip providing traction for the right leg’s extension as the corresponding sit bone lifts off of the saddle. This specific concept of paired asymmetry (right extension/left flexion and vice versa) seems more useful than comparing the downward pedal phase with the flexor of its own leg (mechanical efficiency), since they happen in different temporal situations and the movement seems to be, at least according to our data, influenced far more by the opposite leg segment than by the same leg in another phase (Hunter, 2015 and our own as yet unpublished data).

Based on our brief pioneering experience and the data gleaned from our case studies, we can offer some general recommendations. We believe that optimum pedaling demonstrates a left/right power balance of 50/50, with an additional balance in GPR and GPA of both legs, achieving a totally symmetrical and harmonious workload and alleviating the risk of injury or damage from incorrect patterns of movement.

It remains to be demonstrated by science whether asymmetry is less efficient from a performance point of view, or, in other words, if symmetry is more efficient. Short-term adaptations (caused, for example, by biomechanical interventions such as changing the riding position, using shims, or changing saddles) sometimes do not present the improved results immediately but depend on adaptation, control and re-education.

About Javier Sola and Jon Iriberri