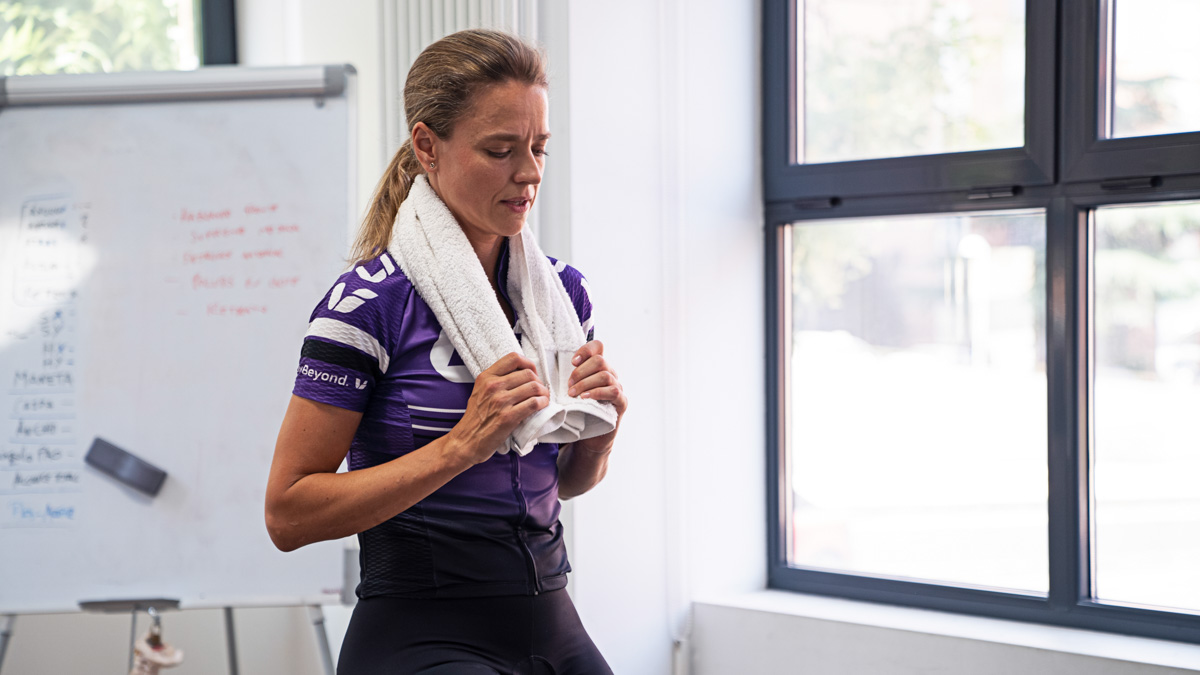 Does it Matter if Your Athletes Have High Resting and Working Heart Rates?

Whether it’s caused by genetics, exhaustion, stress or some other reason, a high heart rate can feel alarming. Here’s when to worry and when to ignore it.

The prevailing belief in the endurance community has been that the more your athletes train, the more efficient their cardiovascular system will become, and the lower their heart rate will be, both at rest and in response to training stimuli. But just like athlete A might put on 10 pounds of muscle during a strength training block while athlete B gains five and athlete C merely maintains their mass, so too do athletes respond differently to endurance training. Let’s look at what you can infer when an athlete has higher resting and training heart rates, how this should impact your programming, and what other data points you can use to evaluate training responses, recovery, and readiness.

What is a Normal Resting Heart Rate?

With any aspect of human physiology, it can be irresponsible to paint anything as either normal or abnormal. It’s typical for athletes’ resting heart rate (RHR) to be lower at rest than the general population, for their maximum capacity to be higher, and for them to be able to do more work at a lower heart rate than an untrained person. As a result, it’s common to find resting heart rates in the 40 to 60 beats per minute (BPM) range, and if you train elite athletes, a couple might even dip below that. Women typically have slightly higher RHR than men because their hearts are usually smaller and so need to pump faster to output a similar amount of blood. This isn’t just true of sedentary people but also athletes, with WHOOP reporting that the average male who uses their technology has an RHR of 55.2, with the average woman at 58.8.

This being said, we’d probably be better off classifying an RHR range among athletes as “typical” rather than “normal.” From a clinical perspective, the Mayo Clinic states that a resting heart rate that’s anywhere between 60 and 100 BPM is healthy. So technically speaking, you could have some athletes whose resting heart rates are well above the average in your group and even a few RHRs that are pushing triple digits. While such numbers might be outliers among your athletes, these individuals are not dysfunctional or at risk from a medical standpoint. The authors of a study published in PLOS ONE noted that RHR can vary significantly without being a health concern, providing that a person’s rate doesn’t frequently go far outside their usual range.

Why Do Some Athletes Have Higher Resting Heart Rates?

Just like body composition and metabolism, resting heart rate has a genetic component. If you start coaching someone who has previously been sedentary, is coming back from a long injury or surgery, or has taken a lengthy hiatus from training, then their heart rate is likely to be higher. Whereas your more experienced clients who have been putting in the miles consistently will probably – as a very general rule – have lower resting heart rate.

However, this isn’t always the case. It could be that one of your clients has a family history of cardiovascular issues that predispose them to a higher heart rate at rest and during exercise. Lifestyle factors can also come into play here. If someone has chronic sleep issues or is in a certain period in which their sleep duration and quality is compromised – like a new parent or shift worker – then their resting heart rate is probably going to be at least a few beats higher than if they were well rested.

Similarly, someone who drinks a lot of caffeine is more likely to have a higher resting heart rate, as is the person who’s undergoing a high stress situation. Also remember that the very act of being observed can create an inaccuracy (a variation of the Hawthorne effect), which is why when one of your athletes goes in for a doctor’s visit, they might be surprised to see that their BPM is higher than usual. The same could be true when checking their heart rate on a fitness tracker.

While an athlete having a higher resting heart rate – say 75 BPM – probably isn’t cause for concern, if it goes up over time or you see big peaks that look like an earthquake on a seismograph when plotting an athlete’s data, you might want to take a closer look at their training load and see if there are lifestyle changes that would be beneficial. If you’re concerned by fluctuations or jumps in any of your clients’ RHR, then urge them to consult their physician.

A second way for you to assess the cardiac efficiency of your athletes, chart their progress, and evaluate the effectiveness of your training programs is to see what their heart rate looks like during various types of training and how it changes over time. There are many different ways to assign different heart rate zones or bands. One of the most experienced players in the heart rate game, Polar, breaks these down as follows:

To establish any athlete’s maximum heart rate, the de facto method is to go with 220 minus age, although as I shared with my co-authors Dr. Andy Galpin and Brian Mackenzie in our book Unplugged, this is a limited methodology as many older athletes can achieve a working heart rate that exceeds the sum of that simple subtraction. Instead, you might want to test how high each of your athletes’ heart rate goes during short, hard intervals and then work backward to determine heart rate zone training ranges from there.

Just like resting heart rate, there might be some surprises in this kind of training assessment. In theory, your athletes who have higher maximum working heart rates and lower resting ones have more efficient hearts and lungs. But sometimes the data doesn’t support this and someone who has lower cardiovascular efficiency on paper might contradict this with their BPM numbers in practice. In which case, you might have to shift the ranges you expect during each training band to accommodate such counterintuitive results.

As with resting heart rate, it might not matter that much what BPM range your athletes are in during each training band. But if their cardiovascular capacity seems to be diminishing rather than improving as they move through a program, this could be an indicator of overtraining, under-recovering, or both. Using a simple heart rate monitor to assess working and resting heart rates over time will help you identify trends and find anomalies among your training group’s data.

Resting heart rate, maximum working heart rate, and heart rate zone training are three ways to measure and monitor cardiac efficiency. But it’s arguable the heart rate variability (HRV) is just as significant, if not more so, particularly when it comes to gauging how fully your athletes recovered from the previous training session and how well prepared they are for the next one.

While a lower resting heart rate is typically viewed as better, with HRV, the greater the variation, the better. Why? Because this indicates higher parasympathetic tone and suggests a better balance of autonomic nervous system function. Consistently high HRV numbers provide validation that an athlete is adapting to the training stimuli your program provides and is recovering adequately between sessions.

Getting the balance right between work and rest is key to ensuring higher HRV scores. Demand too much of your clients and their HRV scores could decline. Sleep is also absolutely crucial, as a well-rested athlete is more likely to be a recovered one.

The quickest way for an athlete to transition from a sympathetic (stressed) state into a parasympathetic (relaxed) one is by manipulating their breathing. One review published in the journal Breathe found that the optimal breathing rate for positively impacting HRV is six breaths per minute. So suggest that after training and before bed, your athletes try breathing with five second nasal inhales and exhales for three to five minutes, which should improve their HRV. If any of your athletes’ HRV scores (which can be measured by umpteen apps, fitness trackers, bands, and smart watches) start dipping, you might want to drop the overall volume and intensity levels for a while and encourage them to double down on recovery.

How quickly your athletes are able to get their heart rates down after training might matter as much as what their resting heart rate is and how it varies during different sessions. Post-exercise heart rate recovery isn’t merely useful for evaluating your clients’ fitness but could also help you identify a threat to their overall health. A study published in The New England Journal of Medicine found that those people whose heart rate dropped less than 12 beats per minute after intense exercise had a significantly higher mortality rate. So if any of your athletes struggle to get their BPM back down after training, you might suggest that they see a cardiologist to make sure there isn’t a bigger issue.