WKO4 Case Study: The Making of a Champion Cyclist as Viewed Through the Lens of the WKO4 Power-Durat

The Power Duration Model is extremely valuable in viewing changes in an athlete both within a season and across seasons. In this case study, Dr. Andrew Coggan shows how he was able to use it, along with other powerful charts in WKO4 to coach a champion cyclist.

One of the new features found in WKO4 is an advanced mathematical model of the relationship between the power that a cyclist can produce and the duration for which they can sustain it. This model was developed and validated using well-established and widely-utilized statistical modeling procedures, and has been demonstrated to provide unbiased, independent, and precise estimates of an individual’s model-derived functional threshold power (i.e., mFTP), resistance to fatigue during supra-FTP intensity exercise (modeled as a functional reserve capacity, i.e., FRC), and maximal neuromuscular power (i.e., Pmax).

However, as a further test of the utility of this model, it’s responsiveness to changes in fitness both across seasons as well as within a season was assessed for multiple athletes. This article presents the results of one such assessment, using data from an individual who started using a power meter very early in their career and continued doing so until they retired after achieving their goal of winning a national championship.

Changes in Pmax, FRC, and mFTP Across Seasons

The individual whose data form the basis for this article is in fact my wife, Angie Coggan. Angie started cycling competitively in her late 20s. Due partially to her background as an inline skater, she progressed very quickly in cycling. She became competitive in national and international-level stage races in her first season.

After this, however, she decided to focus on the individual pursuit, in part due to the suggestion of her coach, who was himself a former Olympic track cyclist. Training at the Lehigh Valley Velodrome in Pennsylvania in the summers and at home in the southeast in the off-season, she pursued this goal for the next 2 years.

During this time, she attempted to maintain a relatively high level of fitness year-round, with the most common track workout  being multiple 2 km efforts at race pace from a rolling (“flying”) start. As shown in Figure 1, this approach to training (as well as simply additional specific training as a cyclist) resulted in a 15 to 20 percent improvements in her FRC and a 5% increase in her mFTP, but no significant change in Pmax. 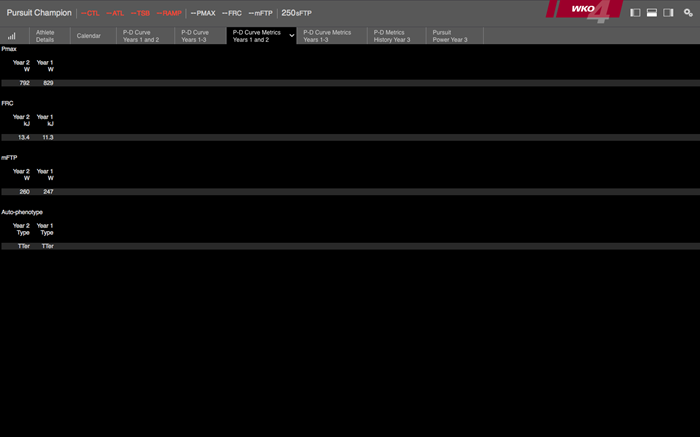 Figure 1. Report listing the athlete’s Pmax, FRC, mFTP, and phenotype during their first two seasons focusing on the pursuit.

Their relatively modest improvements in maximal power at various durations is also evident by examining the fitted power-duration curves from these two seasons (Fig. 2). 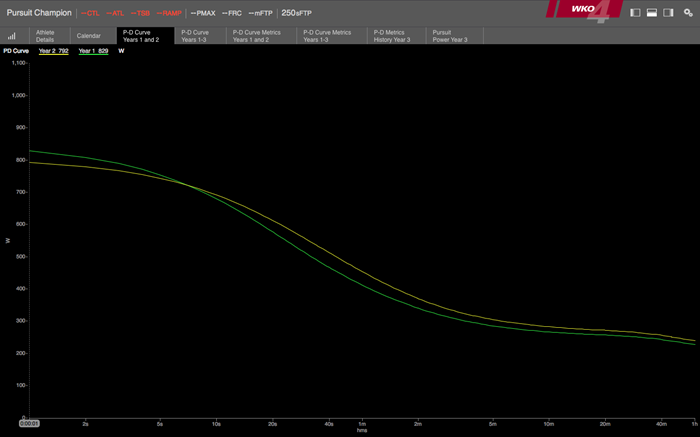 Figure 2. A nearly two month long period of road racing (supplemented with level 5 intervals), necessary to fulfill team/sponsorship obligations and intended to serve as a transition from phase 1 into phase 3 below.

Utilizing the above approach to training, Angie placed 4th at the US Olympic trials and 5th at the US National Championships in her second season (first year of pursuiting), then finished 2nd at Nationals the following year. She considered retiring at this point, but ultimately chose to compete one more year in hopes of bringing home a stars-and-stripes jersey. After briefly hiring another well-known coach, she decided to “go it alone” and design their own program. Among the changes she made was following a much more highly structured, some would say periodized, training plan, with specific emphasis on different aspects of fitness at different points during the year. This plan began with  a lengthy period devoted to developing a very high level of muscular metabolic fitness (for which mFTP serves as an integrative biomarker). This was followed by a focused period of pursuit-specific training, to maximize neuromuscular power (Pmax) and especially resistance to fatigue during very high-intensity exercise (FRC). Finally there was a carefully-designed taper. During the latter two phases (described in greater detail below), she trained on the velodrome with a group of other highly-motivated track cyclists, directed by a former pursuit World Champion. The relative duration and emphasis of each phase was based on a careful analysis of the physiological demands of the individual pursuit as well as the time course/magnitude of possible improvement in the underlying abilities required to meet these demands. Everything  was designed with the singular goal of achieving peak performance at Nationals, which occurred in late August of that year.

As shown in Figures 3 and 4, the results of these changes were tremendous, especially in terms of FRC and Pmax. Specifically, FRC more than doubled compared to previous years, whereas Pmax increased by  almost 25 percent. Changes in mFTP were seemingly minimal, at least when calculated by combining data for the entire year, but as discussed below, significant improvements occurred in this parameter as well. The net result of these changes was a shift in Angie’s automatically- and objectively-determined phenotype in WKO4 from “TTer” to “pursuiter” and a resounding victory at Nationals, including defeating the UCI top-ranked pursuiter in the semi-finals. Based on this performance, Angie was selected to represent the U.S. in subsequent international competition. 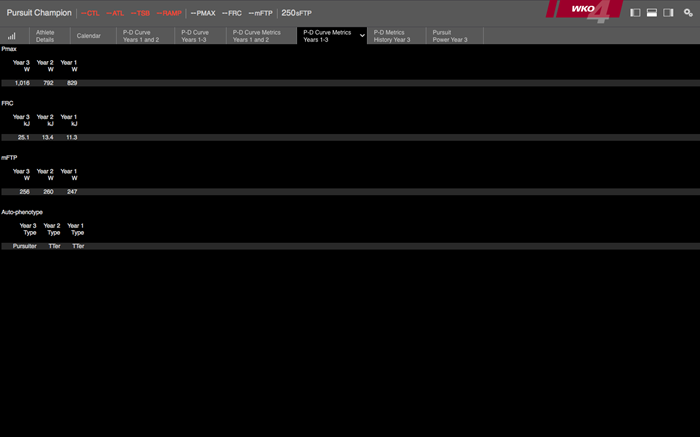 Figure 3. Report listing the athlete’s Pmax, FRC, mFTP, and auto-phenotype for all three seasons. Note the large increases in Pmax and especially FRC, as well as the change in automatically- and objectively-determined phenotype from “TTer” to “pursuiter.” 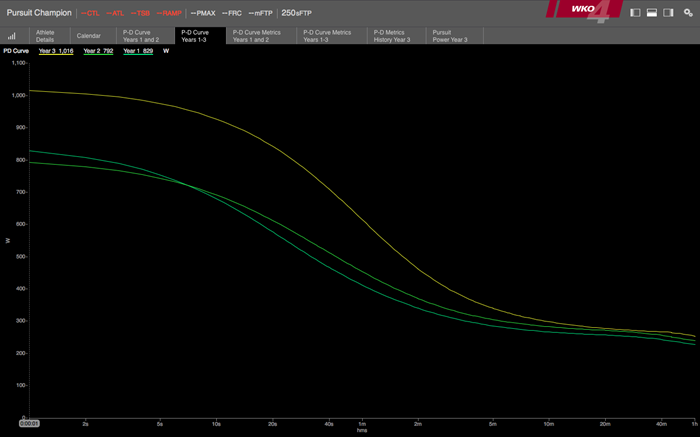 Figure 4. Curve fits of the power-duration model for all three seasons. Note the large increases in power during the third season at all durations less than ~5 minutes, as well as the extended “shelf” or plateau in power out to ~20 seconds, indicative of an increase in FRC.

Changes in Pmax, FRC, and mFTP Within a Season

The data presented above illustrate the sensitivity of the WKO4 modeling approach to year-over-year changes in fitness. The model is also sensitive to changes within a given season, however, at least in athletes who are training hard and racing regularly. This can be demonstrated by using the model to analyze the data of the above athlete during their championship season, divided up into four different phases:

These different phases of training resulted in corresponding changes in the model-derived parameters of Pmax, FRC, and mFTP, as shown in Figure 5. Specifically, during the “build” phase her Pmax and FRC remained essentially constant, whereas her mFTP rose from 225 to 260 W. 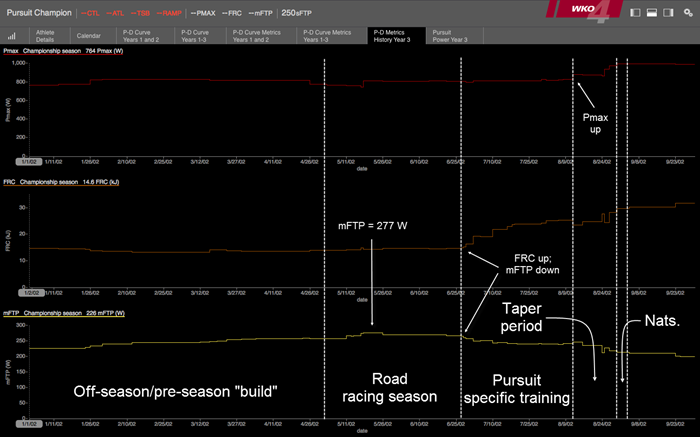 When she began racing regularly on the road, mFTP then rose further to a maximum of 277 watts after just a few weeks, but Pmax and FRC did not change significantly, consistent with the fact that road racing is a predominantly aerobic sport. mFTP then seemingly began to decline somewhat, presumably due to the shift in emphasis away from level 4 efforts (e.g., 2 x 20 min at 100% of FTP on an ergometer) towards more level 5 interval training. (Note: Five years later, Angie made a brief return to competitive cycling and averaged 269 W during a 40 km TT raced after just four months of training, thus essentially confirming this maximum mFTP value.)

Thereafter, her mFTP continued to drift downward as she began training specifically for the pursuit, but FRC began to increase immediately, precisely as expected and intended. These reciprocal changes in mFTP and FRC continued during the taper period, but in this case were accompanied by a significant increase in Pmax. This is consistent with both the scientific literature and practical lessons learned using the Performance Manager approach, which indicate that it is performance at very short durations that is impacted the most by “freshness.”

Interestingly, these increases in Pmax and FRC were sustained, and perhaps even further amplified, during the “recuperation” period, but mFTP continued to decline to lowest level observed all season. Again, this is in keeping with both scientific studies as well as empirical wisdom, which suggests that athletes may need to taper longer than they normally do to maximize performance during very high intensity exercise. That they are frequently unwilling to do so may reflect the fact that they sense their “base” dissipating too much, as evidenced by the decline in mFTP during this period.

In terms of changes in power during pursuit-duration efforts, the net result of these variations in Pmax, FRC, and mFTP was a steady rise throughout the season (Figure 6). 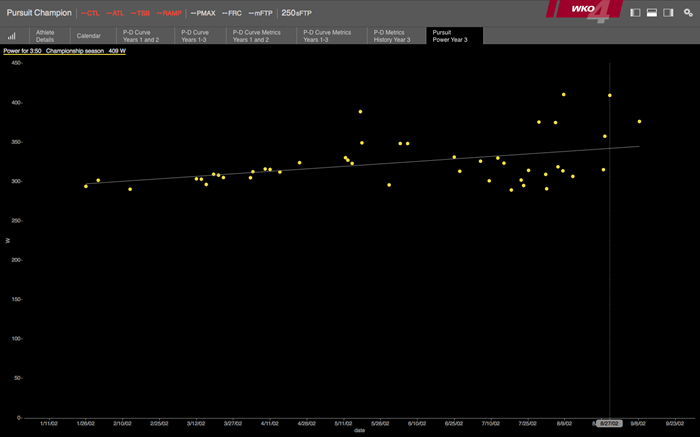 Figure 6. Scatter chart illustrating the evolution of the athlete’s maximal pursuit duration power (i.e., 3 minutes 50 seconds) over the course of their championship season. The gray line represents the line of best fit. Note that the increase in power observed was not simply due to lack of maximal efforts at this duration earlier in the season, as, e.g., even in the off-season they frequently took park in highly competitive group rides over varying terrain.

The present case study illustrates not only the sensitivity and specificity of the WKO4 model to both between-season and within-season changes in performance ability, but also provides unique insight into the time-course of a champion athlete’s historical development.