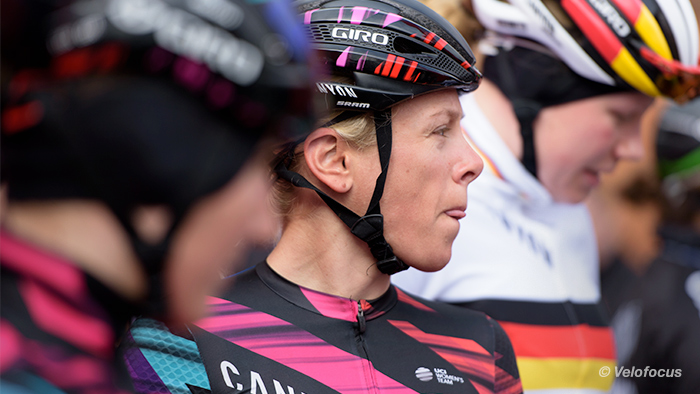 When 38-year-old Leah Thorvilson—a former elite marathon runner with relatively little cycling experience—joined the 2016 Zwift Academy, she was simply looking for a way to rehab from surgery. What she got instead was a pro cycling contract and a once-in-a-lifetime opportunity.

In the largely traditional world of cycling talent identification programs, science is king. Riders usually spend years rising through the ranks of their junior and national programs, hoping to get a shot at a pro contract along the way. Regular, rigorous laboratory tests define them early on, with some potentially talented riders eventually burning out or simply moving on with their lives off-the-bike along the way. Other potential riding phenoms lack the access to the sport, the money or even awareness of national cycling programs in the first place.

But in today’s data-driven world of sports performance, one filled with tracking apps and metrics that stretch the imagination of what one’s potential might be under the right direction and circumstance—talent identification is being respectfully but deliberately turned on its head. Last year, the virtual cycling software Zwift partnered with the women’s pro cycling team CANYON//SRAM to create a first of its kind talent i.d. program—Zwift Academy—which used Zwift riding modules and TrainingPeaks’ in-depth metric analysis to select a new rider for their 2017 team.

“Zwift Academy is a modern twist on talent identification. We’ve created a new path for people to show what they can do, and along the way we cultivated an online community of supportive, like-minded female cyclists from all over the world,” said Zwift Academy’s partnerships manager, Kate Verroneau.

With thousands of riders from more than 150 countries actively using Zwift, Verroneau and her team knew they had plenty of fish in the sea, but the question came down to who was on board with this new, modern take on talent identification. For CANYON//SRAM, the opportunity was a no-brainer. “It was a different, exciting way to approach new talent while still keeping with the traditions of the sport,” said Beth Duryea, CANYON//SRAM’s sports director. “No other women’s cycling team, or men’s for that matter, had ever done talent identification this way, but we were willing to take the risk, and we’re incredibly proud of the results and of the response.”

The requirements to join were simple: You had to be a be a female over the age of 18 with a Zwift account. When Zwift Academy’s enrollment opened in early summer of 2016, more than 1,200 women from 51 countries enrolled. They ranged in age from 18 to 55 (with an average age of 38), and during the six months of the competition they would collectively log 692,558 miles during more than 45,900 hours of riding.

The competition was split into three phases: a qualifying program, semi-finals and finals. In the qualifying program, riders were required to complete at least nine virtual group training rides, as well as 27 structured Zwift Academy workouts in order to be eligible to advance to the semi-finals. Based on their performances and after careful analyzing in TrainingPeaks along with extensive background interviews on their racing history (none of the competitors were allowed to have ever raced as a professional), 12 semi-finalists were chosen to move forward and were provided mentorship from CANYON//SRAM rider Tiffany Cromwell. During this time the riders were invited to on-site, outdoor rides and further performance testing. Three finalists were chosen to attend CANYON//SRAM’s training camp in Mallorca before the final selection was made.

During the six months of competition, a unique bond amongst the women began to form, albeit largely virtually at first. A closed Zwift Academy Facebook group was started, and each day it would be filled with notes of encouragement, gear and riding advice–and genuine friendships blossomed. “For our regular group rides, Zwift made it possible for groups of 60 women from all over the world to ride together at the same time, and after a while they began to really know one another,” said Verroneau. “Women from all backgrounds, no kids, four kids, single, married, whatever—they helped each other with technical issues, time management issues and everything in between. And eventually they started meeting up in real life to ride as well.”

For 2016 Zwift Academy winner Leah Thorvilson of Little Rock, Ark., the Zwift Academy (and the Zwift Academy community) came at an important crossroads in her life. A former elite marathon runner, the 38-year-old had been sidelined with overuse injuries for several years and picked up cycling while in-between major knee surgeries. “A coach of mine had taken me out on a ride years ago as a way to crosstrain because of my injuries. He got me in clip-on pedals and I fell over a retaining wall and thought, ‘cycling is not for me.’” But in 2015, after knee-surgery number one, Thorvilson signed up for a 100-mile bike ride, bought a bike and discovered that not only did she like riding—she loved it. “After my second surgery in early 2016 I could only ride indoors, so I bought a trainer and some of my friends told me about Zwift Academy,” she said. “The locals around here always think of me as this great athlete from my running days, and so they all told me I would win. I didn’t think that I would—but I liked the idea of seeing how far I could go.”

As a full-time development director for the University of Arkansas, Thorvilson had to really put in an effort to get all of her qualifying rides and workouts in, and until she reached the semis, she wasn’t exactly sure where she was stacking up. “It got pretty intense,” laughed Thorvilson. “All the girls were following each other to see each other’s ride data, and then we started receiving all these interviews and extra tests and it was hard to know where you stood. I just wasn’t sure, and I really didn’t want to get my hopes up too much.”

But Elliot Lipski of the UK-base cycling coaching company TrainSharp knew exactly where each of the 1200 riders stood. TrainSharp worked with Zwift and CANYON//SRAM to analyze the data of every Zwift Academy rider using TrainingPeaks. At first, Lipski said they were looking at the women’s average power over a set duration, power-to-weight ratio and the number of hours they were logging to show adaptation and fatigue. “Obviously, the gold-standard in talent identification is laboratory testing, but since we couldn’t put 1200 applicants in a lab, we devised a series of criteria that the initial applicants had to meet to make it through each stage. As we dwindled down the numbers, we were able to spend more time on each rider, analyzing files and sending them questionnaires for feedback,” said Lipski.

Once the 12 semi-finalists were chosen, Lipski and his team utilized the Performance Management Chart and compared Peak Power Curves to make their final three selections.

“All of the finalists in this program had the foundations to make great professional cyclists,” said Lipski. “Where Leah particularly stood out to me was her upper-aerobic power intensity, where she could hit about 6 watts per kilogram during the final three minutes of a tough training block—it was impressive,” said Lipski. “With Leah I would also argue that her strength is her versatility. She is able to produce more than 15 watts per kilogram in a sprint while also being able to handle a high workload. These are vital skills for becoming a world tour rider.”

When Thorvilson was offered the pro cycling contract at the end of the CANYON//SRAM training camp in Mallorca, she was stunned and elated. “Even just attending the training camp in Mallorca was, for me, the beginning of the coolest thing I’ve ever done in my life,” says Thorvilson. “I had never thought about just what becoming a pro rider would mean, and the camp was a wake-up call for just how much things would change.”

And they have. Thorvilson quit her job (taking an 80 percent pay cut) and her days went from being filled with meetings to being spent outdoors on her bike—and she wouldn’t want it any other way. “This year I’ll get to see the world on two wheels,” says Thorvilson. On February 26 she raced in her first UCI race, the OmLoop van het Hageland in Belgium, and she’s excited for what the rest of the year will bring. “I want to be able to contribute something to the team, that’s my main goal,” said Thorvilson. “I don’t need to be a hero or anything, but I want for this to end with them believing that they made a good decision and I want to work hard enough to feel like I really earned this wonderful, life-changing opportunity.”

Zwift will be partnering with CANYON//SRAM for year two of the Zwift Academy in the summer of 2017, with registration opening in June and the qualification phase starting in September.

About Susan Legacki
Susan Grant Legacki is the Content Director at TrainingPeaks. The founding editor of LAVA Magazine and a former editor at Triathlete Magazine and Inside Triathlon, Susan is an IRONMAN finisher, Boston Marathon qualifier, USAT Level 1 Triathlon Coach and certified Pilates instructor. When she's not editing or writing copy about endurance sports, you can usually find her training for them around Boulder, Colo.
#CYCLING#ROAD