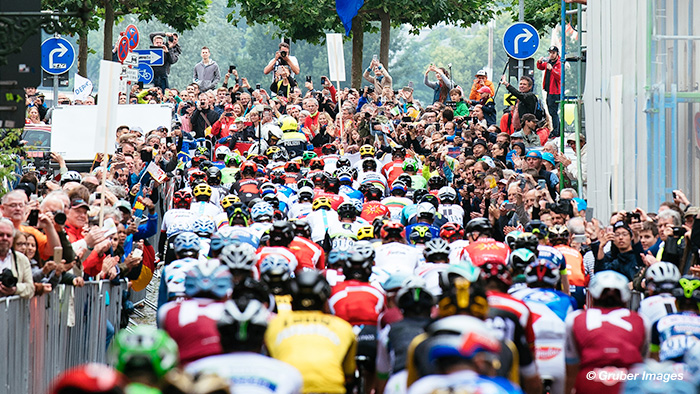 A look at how Orica-Scott’s Howson and Katusha-Alpecin’s Kristoff navigated the treacherous 2017 TDF Stage 1 time trial.

The 2017 Tour de France began in Düsseldorf, Germany in cold and wet conditions for the 14 km ITT that kicked off this year’s race.. The day was a dramatic scene as many riders fell victim to the conditions with crashes and tumbles on the treacherous corners.

The conditions turned this TT into a tactical battle on how to manage the bike on the corners and when to use the power and speed in the right places. For riders such as Valverde (ESP) Movistar Team and Izagirre (ESP) Bahrain-Merida, this stage was to be their last after serious injuries due to crashes.

The route was made up of a long straight on the outward leg, which allowed the riders to power along the 3.3km straight running parallel to the Rhine river before entering the city centre circuit. The circuit included the many corners that would be decisive in their final result. Once the riders left the city centre they then had the return leg of a straight road back along the Rhine river as they powered along the final 3.7km to the finish.

Today we’ll be looking at Orica-Scott’s Damien Howson and Katusha-Alpecin’s Alexander Kristoff as we compare how they navigated the technical, wet conditions of the Stage 1 ITT.

Howson comes into the TDF with a support role for The Orica-Scott GC rider Esteban Chaves, but the ITT was an opportunity for the 24 year old Australian to show is TT ability. The ex-World U23 TT champion is no stranger to suffering on his TT bike and the first stage saw him step up against the world’s best.

We have the rare opportunity to see the riders warm up data and how he prepared to take the start ramp fully primed and ready to kick off the stage. Here is a breakdown of his warm-up routine:

With the race being broken down into three sections, the outward leg straight, the technical city circuit and the return leg straight, we can look at how Howson distributed his power over this 14km.

He kicked hard off the start ramp hitting his peak power for one minute as he managed the two turns before coming onto the first straight. He averaged 509w hitting a max of 764w in the first 800m of the stage, once the initial corners were taken he then settled down to a 3.5 minute effort of 422w, 6.3 w/kg, averaging 54 kph as he powered his way to the city centre.

Once entering the city circuit, the riders had 12 corners and bends to negotiate during this 5.8km section. We can see from Howson’s file that he has his peak 30 second power after exiting one of these corners when he lifted his effort to an average 571 w for 30 seconds, hitting a max of 735w.

This type of effort was seen across most of the 12 corners where Damian eased off the power on the approach to each corner and then hit a hard 10 to 30 sec effort of around 550 w to 700 w to build back up to speed after safely negotiating the bends.

Once safely back on the return leg with the long straight to the finish Damian powered at 444 w average, 6.63 w/kg, for the 4:37 min effort on the final 3.92 km as he approached the finish line.

Alexander Kristoff is seen as one of the favourites for the sprint stages but his performance in Stage 1 also shows his ability in the shorter and technical TT’s with a great 27th place on this first stage. Kristoff powered off the ramp hitting a max of 900 w, 11.92 w/kg, before entering the long straight toward the city. On this straight Kristoff’s technique can be seen as he pushed a bigger gear and lower cadence compared to Howson. He averages 452w, 5.97w/kg at 86 rpm (compared to a Howson’s 96 rpm), this was for the 3.5 minutes as he powered along the wet roads heading into the technical section.

On the city circuit it was a similar story to that of Howson, 12 times he had to make a jump out of a corner after an initial slowing into the bends and easing off the power so to keep upright and avoid a crash. With these accelerations hitting more than 700w each time he made the effort to get back up to speed you can see easily that a rider’s ability to be able to recover from short sharp accelerations is essential if they were to have the effort to power back on the return leg home.

This was perhaps a big bonus to Kristoff as his return leg average speed was around 1.5 kph faster than that of Howson’s on the last 3.92 km. Kristoff powered at an average of 483w, 6.39 w/kg, in 4:29min for this last section grinding at 83 rpm as he pushed a big gear home.

Click on the image below to see Kristoff’s Stage 1 ITT Quarq Power File:

Some people will have noticed the considerable difference in the power:weight differences between the riders, with Kristoff being the lower of the two riders we have analysed but he had the faster time.

This reflects the requirements on a flatter (and technical) circuit that higher power output is more important than power:weight ratio’s. This, combined with a great aerodynamics, is the perfect combination when working towards a great result on a flatter ITT.

It is also noticeable that both of these riders are in peak form, with big power numbers being produced consistently over the 14 km course it is clear to see these riders will be to the fore during this year’s Tour.