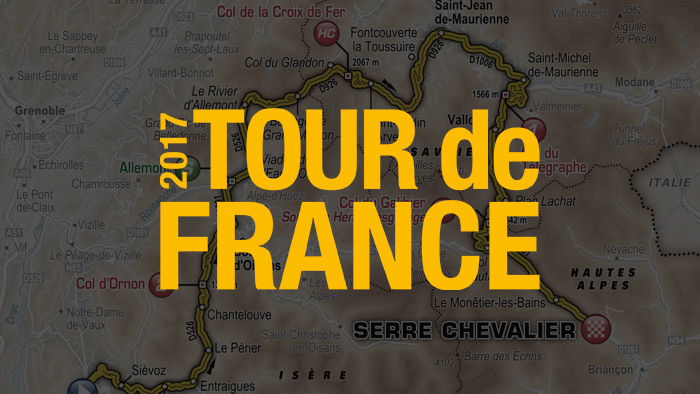 A look at what stages to watch and who to look for during the 2017 Tour de France.

The 2017 Tour de France is a bit of a departure from the norm. It features two time trials combining for just 36.5 km of the 3,540 km race, nine flat stages for the sprinters, five hilly stages, and five mountain stages. The mountain stages touch every major mountain range in France including the Vosges, Jura, Pyrenees, the Massif Central and the Alps.

It is interesting to note that with only three true mountain top finishes over the five mountain stages, there are significantly less true climbing stages than in year’s past. However, with the addition of more hilly stages there are still a significant number of classified climbs.

This year it appears organizers plotted a course that doesn’t overly favor one discipline, and by keeping podium time bonuses, the goal is to have an extremely close and exciting race from start to finish, culminating with the decisive final few stages before the final ride into Paris.

Throughout the Tour we will be focusing on several of the key stages where we will drill down into the strategy and potential outcomes of each race. Like any other year, the Tour is magical in its unpredictability. Whether it’s echelons in the crosswind, solo mountaintop breakaways, or even Froome attacking the descent—anything can and will happen over the 21 stages. Below we highlight the stages we think could make or break the tour:

The initial stage of the tour is a 14 km Individual Time Trial that travels along, over and even under the Rhein river before looping through the city center and back along the Rhein to the finish. The course is flat, save for the bridge over the river, but there are several technical turns which will favor a TT specialist with high acceleration power who can corner and get back up to speed and in aero position quickly

This stage will obviously not make the tour, but it will be a very good indication of where the General Classification (GC) contenders are form-wise going into the race. Richie Porte of the BMC Racing Team has been putting in very good times on the TT bike, so a nice early statement to his rivals might be in order. For Movistar’s Nairo Quintana, it will be a test of how well he has recovered from the Giro, where he lost out to Team Sunweb’s Tom Dumoulin on the final stage TT. With fewer mountain stages, Quintana cannot afford to lose much (if any) time to his rivals before the final week.

The more interesting story will be who wears the yellow jersey after the first day. Team Katusha-Alpecin rider and German Tony Martin is no doubt extra motivated to pull on the maillot jaune on home soil, but the motivation is high for all the TT specialists on a flat but technical stage.

Stage 5 is not considered a mountain stage, but the lead and yellow jersey will most likely change at this point in the race. This stage’s final climb into La Planche des Belles Filles is 5.9 km at an average gradient of 8.5 percent, with sections eclipsing a 20 percent grade. Chris Froome notched his first stage win on this climb in 2012 while chauffeuring Bradley Wiggins to his win so there may be some incentive to make a statement with both the stage and overall spot this year.

The day before the rest day could see significant separation of the GC rivals to the field. While there are fewer mountain stages this year, they are steeper than in year’s past. With three HC climbs on the day, including back-to-back cimbs of the Col de la Biche and the Grand Colombier, which features sections with more than a 22 percent gradient, it will be a day where the contenders can really separate themselves.

These types of very high gradient climbs favor riders whose high watts/kg rely more on the weight side of the equation. That being said, there is plenty of road for the race to pull back together leading into the final climb up Mont du Chat, where no doubt teams will be on the lookout for a Froome-like descent attack this year.

Starting in Pau, a favorite spot for the Tour, this stage is long and features six categorized climbs through the Pyrenees. These climbs are more typical of previous tour stages with average gradients between 7 and 8.5 percent. While the stage features the second mountain top finish, in that gradient range Froome is almost untouchable with his combination of ideal power/weight ratio with more weight than Porte or Quintana but higher-end climbing power. With a rest day and two flat days preceding this stage, it will be interesting to see if attacks come from the GC to test each other, but most likely this would be a good stage for a breakaway solo win from the field.

This stage is the shortest (non TT) of the tour, but after a long day in the Pyrenees and with three Category 1 climbs, it will most likely feel a lot longer. The run into the finish after the final climbs up Mur de Péguère is probably too much for much separation of the GC, but it’s Bastille Day, so the French riders should be gunning for the stage win from the outset.

As in many previous years, the race will really heat up in the final week of the Tour. With two mountain stages and an Individual Time Trial, the last three stages leading into the run into Paris should be the deciding factor in the GC. Depending on who is in the lead by Stage 17, tactics can and will be played out very differently, but organizers are hoping for (and fans should expect) some fireworks.

The first day in the Alps is almost a setup for stage 18. While there are two HC climbs including the Col de la Croix de Fer and the Col du Galibier, it lacks the mountain top finish and GC riders will no doubt be looking toward the second day in the Alps. This could perhaps play into a team’s strategy as the run to the finish starts technical but opens up into a long downhill stretch. A gap at the crest could stick if weather conditions are aligned.

If things are close this will be the make or break stage for the GC. While some separation could happen with attacks up the Category 1 Col de Vars, the stage will inevitably come down to the summit finish of the Col d’Izoard. This HC climb is 14.1 km long with an average gradient of 7.3 percent, but the real kicker comes after the halfway point where the gradient often spikes over 10 percent. Movistar claims Quintana is on form and if that is the case is likely to be leading at the end of the day before the ITT in stage 20. This is the first time the Col d’Izoard has been featured as a stage finish and it is sure to be memorable no matter what.

The penultimate stage is a 22.5 km Time Trial that is a short but very technical course which features a 1.2 km 9.5 percent grade climb. Despite the short distance, after two punishing days in the Alps—including the mountain top finish up the legendary Col d’Izoard—there could be some time gaps opening up and even some shuffling at the top end. While none of the GC contenders can probably match Dumoulin’s Giro performance, Quintana and the lower powered contenders will need to have a good lead to hold off Froome.

Filling in the Gaps

With more raw sprint stages this year, the green jersey competition might be a bit more open than previous years where Sagan simply ran away with it. It will also give Cavendish several shots at increasing his stage win total, though his form is an unknown leading in.

While we are not planning on doing in-depth previews of all stages, if the conditions leading up to the day look like there could be significant tactical plays (heavy crosswinds or abnormal conditions) we will highlight those that could prove interesting to the final outcome. As we did last year models of the stages will be available on Best Bike Split on our 2017 Tour de France coverage, and expect some fun images and highlights from the Stage 1 TT on Twitter and Facebook.

Learn more how the pro riders prepared for the Tour and get unique stage predictions and power analysis as the race unfolds on TrainingPeaks.

Gain powerful insights into your own race-day outcomes by signing up for Best Bike Split for free today.

Stage profiles and maps from letour.com.