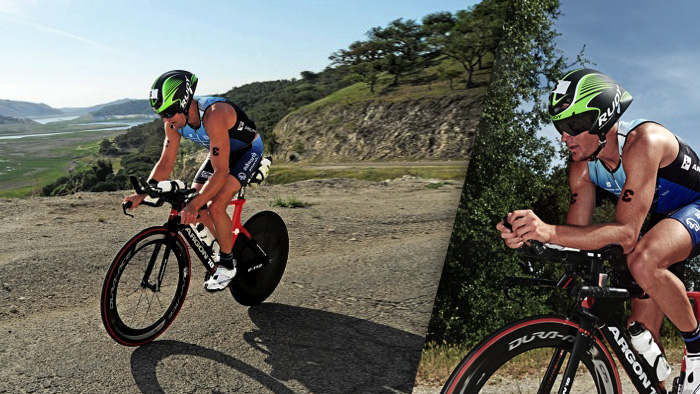 Professional triathlete Leon Griffin breaks down the Mt. Tremblant course and gives age groupers advice on how to tackle this difficult course.

For the first time ever, the 70.3 World Championships will be held outside of the U.S. at the picturesque ski town of Mt. Tremblant, QC, Canada. This course is very different from the previous location of Henderson, NV. and presents unique challenges.

Last weekend the non-championship version of the event was held and Australian Leon Griffin took a hard fought third place. It was his third race in three weeks, having placed third at 70.3 Eagleman and 15th at 70.3 Boulder. After his race in Mt. Tremblant Griffin sat down with us to talk about his race and give advice to athletes racing the championship event in September.

Griffin exited the water with Trevor Wurtele and Jesse Thomas, the trio was two minutes back of the lead swimmer David Kahn. They were confident they would catch Kahn and did so around the 20 mile mark. From there, it was a fight for Griffin to stay with his two rivals.

Over the rolling terrain for the first hour Griffin’s Stages power meter shows that he held 303 watts, which was right at his Functional Threshold Power (FTP). FTP is what a rider can sustain for 60 minutes, so essentially Griffin red lined the first hour. While this is definitely not the way an age grouper should race, the pro athletes race each other and have to stay in contact in order to be on the podium.

At the 30 mile mark is a longer climb averaging about 6%. Griffin pegged this climb as Thomas was trying to create a gap. For four and a half minutes Griffin’s Normalized Power® was 329 watts, well above threshold. After riding at his threshold for an hour, and the effects of the two previous races, this effort finally cracked him. His watts dropped and he admittedly struggled the rest of the ride. The final hour of racing Griffin held 264 watts, well below what he produced during the first half of the bike.

Though his power dropped, his power output was still quite steady over the entire ride, even over the toughest terrain at the end. His Variability Index® (VI®) was only 1.03. VI measures how even a rider’s output was over the course of the ride. For 70.3 and longer events, we look for a VI of 1.05 or lower. So while Griffin went out like gangbusters, he didn’t spike the watts then blow up. Rather, he went just a little too hard for too long. Plus, having two hard races in his legs certainly didn’t help.

Despite the fatigue in his legs, he still had a strong run and placed third. There is a lot to learn from this power file and thankfully Griffin was more than happy to share his experience and pass on advice to those racing in September.

Griffin’s first piece of advice is telling, “If anyone underestimates the course, that’s your biggest mistake,” he said. The hilly nature of this course will test every athlete and Griffin recommends overestimating its difficulty. Griffin believes that what makes the course particularly hard is that the toughest part of the course is near the end. “From 70 to 80km (40 to 50 miles) is the toughest part of course- especially if you haven’t paced well,” he says. “There are two to three climbs where you will be sub 10 mph for one to two minutes. You can take one to two minutes out of others that didn’t pace well.” Looking at Griffin’s file, at mile 47 he put out 329 watts for 1 minute and averaged only 10mph.

So should you bring a road bike? Griffin’s advice is to stick with the tri bike. “There are too many flat sections along the highway that are fast,” he says. He also commented that the out-and-back highway section (miles 10 to 35 approximately) is really wide, so passing won’t be an issue. For gearing, his recommendation is that if you are strong climber you can use a 25 tooth rear cassette but if you struggle when the road turns upward, use a 27 or 28 tooth. Compact gearing is not needed as spinning out on the downhills will cost you too much time.

As you can imagine, preparing for this course is fairly obvious. “Find hills and make them your friend,” was Griffin’s recommendation. After speaking with his coach, Griffin will be doing two hilly rides and runs per week during his lead up to the championship event in September. So head to the hills to be prepared. Even if you only have one hill in your area, doing repeats up and down it will have you more prepared than riding on the flats.

For age groupers, the approach to this event is not any different than for others, however, the consequence of going too hard are greatly magnified. Pace accordingly, don’t spike your watts, and race your own race are the three elements that work together for every event. To pace accordingly you should know your FTP if you have a power meter, or Lactate Threshold Heart Rate if you are using a heart rate monitor, and keep your effort at 75 to 85% of that number. Sure, there will be some spikes in there, but overall staying in that range will pay off. You will be fit and tapered for the big day, so don’t make the mistake of saying to yourself, “I feel great!” just 20 minutes into the ride. Don’t be concerned with others, as Griffin said, in the last miles you can make up huge time on anyone that goes too hard too early. If you know your pacing and stick to your plan then your VI should naturally fall under 1.05. This can be tricky on hilly courses where you have to push big watts just to keep moving forward. The key is to pace yourself throughout the ride, and pay close attention early on so you don’t go out too hard. See how all of these elements work together?

Pacing yourself on the bike will not only allow you be strong during the 56 mile ride, it will enable you to have a strong run as well. Remember, the run is what gets you to the finish line. A well paced and balanced effort across all three disciplines is typically the best way to achieve a great result.

A big thanks to Leon Griffin for sharing not only his power data but also for providing some inside information on how athletes can achieve their best result on race day. Use his knowledge of the course and advice to be fully prepared for race day.

About AJ Johnson
AJ Johnson is the Content Editor and Power Analyst for TrainingPeaks. He is also a USA Triathlon and USA Cycling certified coach. A jack of all trades in endurance sports, he has raced everything from IRONMAN and marathons to road, mountain, and track cycling. A former freelance writer and editor of TRI and ROAD Magazines, when not editing or writing he spends his time with his family or out on long rides to think of more great content for TrainingPeaks readers.
Visit AJ Johnson's Coach Profile
#IRONMAN-70-3