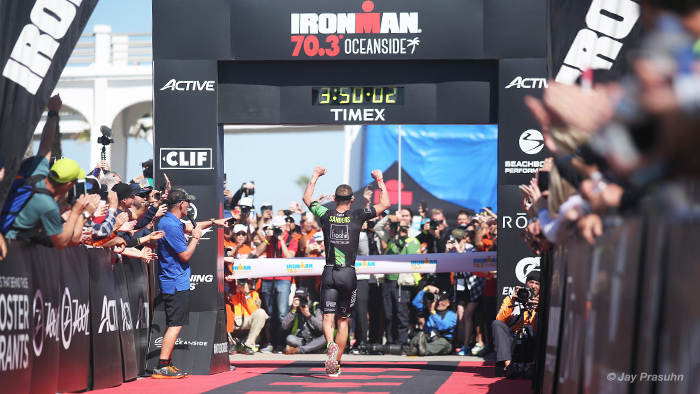 Lionel Sanders’ domination at 2017 IRONMAN 70.3 Oceanside was partially the result of a drastic bike position change, which allowed him to average 354 watts and still crush the half marathon in 1:14:06. Here’s a deeper look at what went into this performance.

Before diving into Lionel Sanders’ winning performance at this year’s IRONMAN 70.3 Oceanside, we wanted to first take a look at his bike position and how it affected his ride. Sanders, long known as one of the strongest riders in the sport, decided to try a fairly radical position change going into 2016’s IRONMAN Arizona after his disappointing showing at the IRONMAN World Championship the month prior. The goal of the position change was to adapt his body to a lower position so he could gain more aerodynamic benefits while not losing any of his raw power.

His first test of this new position was a resounding success as he set the official IRONMAN race record with a time of 7:44:29.

Using the data from his 2016 and 2017 IRONMAN 70.3 Oceanside races (both of which he won) we wanted to do an additional post-race analysis to see how his position compared aerodynamically between the two years. To do this we had Ryan Cooper analyze the data using the new Aero Analyzer Beta feature available on Best Bike Split.

“It’s amazing how similar and consistent Lionel’s data was from 2016 to 2017,” said Cooper. “In 2016 he averaged 352 watts for a bike split of 2:07:47 while in 2017 he averaged 354 watts for a 2:05:42. On roughly the same power he took more than two minutes off his split. This could be due to weather, but when we break down the course we can see that the majority of it is due to the bike position changes he made for IRONMAN Arizona, which he discusses in his blog.”

Of course weather also plays a factor in any race, and Cooper was able to address that as well. “When we account for the environmental differences we can see that his estimated CdA (coefficient of drag x area) using the Aero Analyzer is significantly better in 2017 (Calculated) vs. 2016 (Current),” Cooper commented. “So while Sanders was able to ride faster in 2017, other favorites such as Andy Potts, Andreas Dreitz and Trevor Wurtel were all significantly slower than their 2016 performances.”

It’s clear that Sanders has been working on his swim. Exiting the water closer to the front than in previous years, Sanders quickly changed his planned tactic for the ride. “I was very surprised when I heard my swim deficit to Jan Frodeno,” recalls Sanders. “I was a little over two minutes down to him and under one minute to Andreas Drietz. I had originally planned to drill the initial stages of the bike very hard, but because I was closer to the front than ever before, so I decided to employ a more steady ride.” Sanders covered the first 10 miles at a Normalized Power® of 370W and Average Power of 356W, only one watt higher than he would average for the whole ride.

Click the image below to see Sanders’ bike data file from his PowerTap P1 Pedals:

At the 15-mile mark, Sanders finally saw Frodeno, who was pulled over with a flat tire. With Frodeno out of the picture, Sanders lost some motivation to push. “I had been dreaming of a rematch with him on this course for two years, and a flat tire is definitely not what I had imagined. It actually took me quite a long time to get motivated again. I truly wanted to duke it out from start to finish,” he said.

Like a true professional, Sanders got his head back in the game and got back to his effort.

“Initially I planned to ride 90 minutes steady but when I got there I still felt like pushing good power so kept going until 110 minutes,” said Sanders. During that 90-minute period, Sanders averaged 358W, or 4.78W/kg at 26.0 mph. During the extra 20 minutes that he continued to push, he actually pushed higher watts, 363W, or 4.85W/kg at 28.1mph.

The extra 20-minute section also provided Sanders with another challenge, a nearly mile long climb that most have to spin up in their small chainring. Coming after a short descent, Sanders challenged himself to ride the .8 mile climb of 5.3 percent in his big ring. “On the big climb, I decided to see if I could make it up while still in the big chain ring. It took more than 420W, but I was able to do it,” he recalled. In fact, he pushed 422 NP and 417 Average Power (or 5.57W/kg) at 76 rpm for just over three minutes to crest the hill.

In the final 15 minutes, Sanders allowed himself a little respite from his effort. He backed down to 317 Average Watts while still cruising at 28.1 mph.

For his effort, Sanders posted the fastest bike split of the day, 4:49 faster than eventual second place finisher Chris Leiferman. With a solid lead, Sanders kept an honest pace on the run, clocking the third fastest run split of the day with a 1:14:06.

Checking out his  overall numbers, the effort is another impressive one from the Canadian.

With Lionel’s running ability and the gains he is showing in the swim, he just might be the favorite going into every race this year and becoming more aerodynamic might be the last thing his competitors want to see.

Are you interested in becoming more aerodynamic? Check out Best Bike Split’s powerful capabilities in this free demo.

About AJ Johnson
AJ Johnson has been a USA Triathlon certified coach for more than 15 years and is also certified by USA Cycling. He has worked with hundreds of triathletes and cyclists, from beginners to professionals, to help them achieve their goals. His coaching and training plans are designed to provide a balance between training and the needs of every day life so athletes can achieve their best and enjoy their journey. Find out more about his coaching options and training plans.
#DATA-ANALYSIS#IRONMAN#IRONMAN-70-3#PERFORMANCE