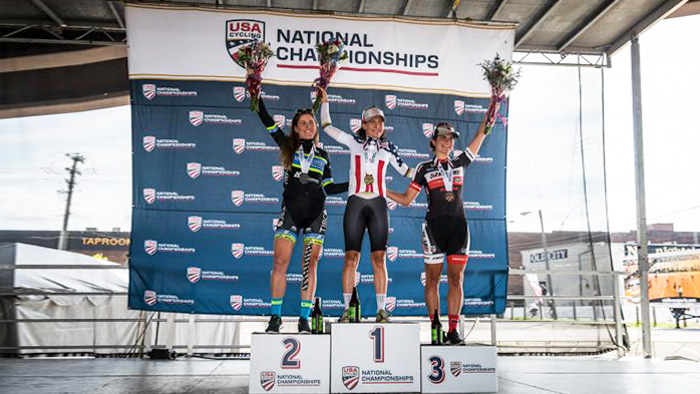 A look at the numbers showing how Amber Neben pulled off wins at both the time trial and road national titles at the 2017 USA Cycling Pro National Championships.

Amber Neben had one heck of a weekend at the 2017 USA Cycling Pro National Championships. The 42-year-old reigning world time trial champion not only won the Stars and Stripes for the time trial on Saturday but also doubled down on Sunday to win the road national title as well, joining Allison Power to be the only female athletes to ever accomplish this feat.

“One of the highlights [of my career],” Neben said of the weekend. “Winning worlds, you can’t top that, but back-to-back national championships is really totally unexpected, and I am beyond words right now.”

So how did she do it? Let’s take a look. All data was recorded with a Quarq DZero (calibrated before the race) and a Garmin 520 head unit.

The time trial course featured three laps winding through downtown Knoxville, with an out-and-back segment along the river. The course was challenging because it featured “a little bit of everything.” To win on this course, a rider would need not only flat-out speed, but also technical skills, power, and, most importantly, patience.

We knew Amber was fast; we’d spent time in the San Diego Wind Tunnel and with ERO Sports and Alphamantis’ Track Aero System, testing her new Cervelo P5, Enve SES bars, and Marcello Bergamo skin suit. We also knew she had the power; her form coming into the event was rising and on target. And patience? We’d done a course review before the race and quickly identified the early power climbs and undulations that could lure a rider into starting too hard on the first lap and fading late. Amber’s strategy was to ride strong but controlled in the first lap, without forcing the early two climbs right after the start, then run flat or negative splits in laps two and three.

As we’ve noted in previous reviews of Amber’s power file reviews, she has excellent power pacing. One advanced analytic we track and work on to continue to hone this power pacing ability is time in quadrants. Utilizing the WKO4 Quadrant Analysis, we can review Amber’s power pacing by tracking her Average Effective Pedal Force (AEPF) and her Circumferential Pedal Speed (CPV), which in basic terms are how hard she pedals compared with how fast she pedals. This is important because analyzing her cadence alone does not supply much insight into how she made power; we need a more comprehensive view of the neuromuscular output and a measurement of both the force and speed of her muscular contractions. Why is this important? Remember, a watt is how hard you pedal multiplied by how fast you pedal. You can increase watts by either pedaling harder, pedaling faster, or both.

The Quadrant Analysis above divides the race into laps, demonstrating how Amber makes power over time. Let’s break out some of the numbers and review:

At first glance, it might seem that Amber is simply fatiguing and grinding bigger gears, particularly when you review her cadence data in the chart above. In reality, however, this is her incredible discipline in pacing time trials. In lap one, she knew she needed to conserve her muscular force, so she created power with a high-cadence/high-force format, shifting some of the strain off of her muscular system and onto her massive cardiovascular system, and accumulating less muscular fatigue. As she continued into laps two and three, she shifted more and more of the effort into high-force/low-cadence mode, tapping into her muscular capability to create power and speed as the finish line came closer.

Amber’s strategy for the road race was simple. With no team and a course deemed by most people to be optimal for sprinters, our best hope was for a hard race and the opportunity to pick one favorable moment to create a solo or small break. We knew Amber had form and was capable of winning, but the challenge of reading the race and selecting the moment was in her hands alone. She’s been racing a long time, and though she doesn’t always get credit for her race smarts—very few people read a race as well as she does.

Our strategy was challenged right off the bat as an early break formed with all the major teams represented, which dropped the pace of the peloton and made the race “not hard enough” for Amber to succeed; it was better suited for a sprint finish. Once most of the break was finally caught (there was a solo rider up the road), with about 2.5 laps to go, there were some fireworks with a few riders taking turns attacking and the bigger teams shutting them down quickly. After a series of these breakaway attempts, the peloton sort of sat up to recover from the harder break-and-chase efforts, as it often does.

It was at this moment that Amber saw her opportunity and immediately attacked the field. She quickly established 5-10 seconds on the field, committed fully to the solo break, and charged after the lone leader. Her patience and pacing took over, and she slipped into time trial mode and steadily reeled in the leader, reaching her with roughly a lap left to go. The two rode together for a short period, but the pace was dropping, and Amber knew that if she allowed the pace to drop, they would soon be caught, so she made the decision to press on alone. The effort paid off; Amber soloed to victory 11 seconds ahead of the charging field.

“The break had been away, and it was really quiet in the back, and I thought I didn’t know if anyone was going to chase this back, and then it started,” stated Neben. “Then we caught the majority of the break except for the one rider, and as soon as it sat up, I knew for me I wasn’t going to be able to stay with those girls if they attacked on that short little climb, so I had to go early, and I just went for it.”

These numbers tell the story. Once Amber made her move, it was the Stars and Stripes or die trying. “I was just hammer down,” Amber said. “Once you go out there, you commit. When I looked at my watts, I thought, Wow, I’m going hard. But if you go, you just go. It was first or 20th.”

Nationals was the conclusion of the first part of Amber’s season and the first step in her defense of the world championship time trial crown. As her coach, I can tell you that Amber’s focus and commitment to excellence is unparalleled. She works hard to achieve her success. And her reward this week? A short rest and then back to training and preparing for Worlds.

Want to harness the power of WKO4 to reach your own goals? Download a free 14-day trial here.

Tim Cusick is the TrainingPeaks WKO4 Product Development Leader, specializing in data analytics and performance metrics for endurance athletes. In addition to his role with TrainingPeaks, Tim is a USAC coach with over 10 years experience working with both road and mountain bike professionals around the world. You can reach Tim for comments at tim@wko4.com. To learn more about TrainingPeaks and WKO4 visit us at TrainingPeaks.com.