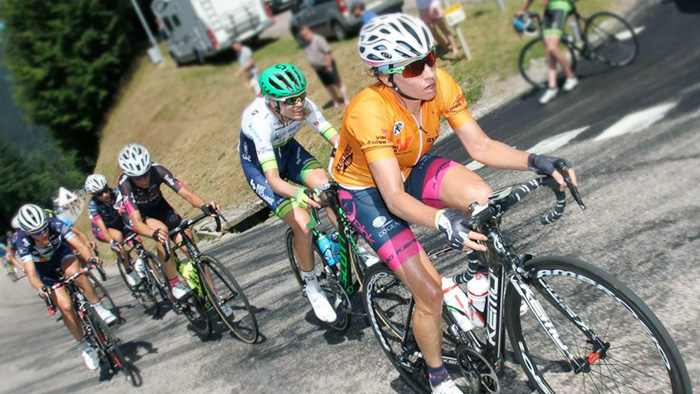 The 2016 edition of La Route de France Féminine Internationale is in the books. American Amber Neben, the overall winner, has graciously allowed me to use her power files to give insight into what it takes to win a grand tour in women’s cycling. Before we get into the analysis, here are a few facts and observations about Amber herself.

Amber is a time trial specialist who also has the ability to climb strong. As a smaller rider, she typically poses a significant threat when the roads turn up, while still cranking out a powerful time trial. The first few stages of La Route were flat, so we decided to focus on the Stage 4 Time Trial followed by an aggressive push on Stage 5, the first climbing day of the tour.

This strategy clearly worked. Amber won both stages and established a time lead over the other General Classification riders, which she was able to defend through the final stage. Let’s take a closer look at these two stages to understand the power it took to capture and secure the Orange Jersey.

The time trial was pancake flat and short, which presented a challenge. Amber is a diesel engine better suited for longer time trials and grueling climbs, rather than the explosion off the start ramp that this time trial would require to win. However, we knew her form was good, and we had a simple strategy: control the effort for the first few minutes, then ramp up the power to finish in a progressive power split (with the second half stronger than the first).

For a typical time trialist, a course this short might be better ridden by starting out a little harder, but for Amber’s engine, we knew it was best to keep to our progressive plan. The result was that Amber won by over 33 seconds on the next finisher and put good time on all the GC contenders. I put Amber’s data into WKO4 to look at some unique tracking metrics. 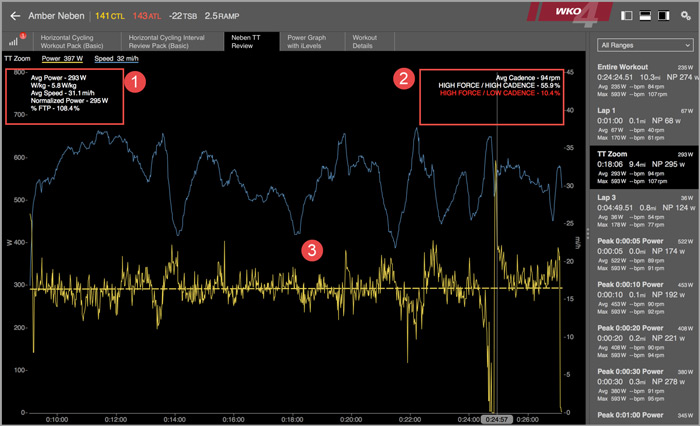 First, let’s review her overall numbers for the stage in the area marked #1.

So how does she do it? Take a look at the area marked #2 on the chart above. Amber is a high-cadence spinner with a target cadence of 95rpm for this type of a power demand. Her secret is that not only can she spin quickly, but she can also maintain high force on the pedals while doing so and avoid plodding.

To better measure this talent, we created some custom tracking to calculate time in Quadrant 1, which is the time she spends pedaling with both high cadence and high force. The more time she spends in this quadrant, the better. We know that if her form and mental focus combine to make this number greater than 50 percent, she will produce excellent speed for the terrain because it allows her to rely more on her massive aerobic ability. We also know that she will struggle if she allows her cadence to drop while producing high force (plodding). So, we also measure this danger zone by tracking her time in the low cadence/high force quadrant. Our goal is to get this under 20 percent because Amber will fatigue faster under this type of load.

The data in this area shows that:

There is a “chicken or the egg” element happening here. Amber is only capable of hitting above 50 percent in quadrant 1 when she is on form; therefore the high percentage demonstrated in La Route not only is a result of such form, it (along with the power numbers) also demonstrates it.

Finally, look at area #3 on the chart. I’m showing only power and speed, but the yellow dashed line is important. WKO4 enables us to use simple linear regression to determine trends, and this line is moving slightly up from left to right, demonstrating that she executed her strategy of progressive power, riding the first half at 291 watts and the second at 295 watts, adding a strong push in the finish.

Stage 5 was the first day the race entered the mountains. Our goal was to attack the final climb hard and put more time on the GC contenders. Amber was able to accomplish this goal, soloing away from the pack in the final few kilometers of the climb. Using the same chart and metrics, let’s take a look at her numbers. 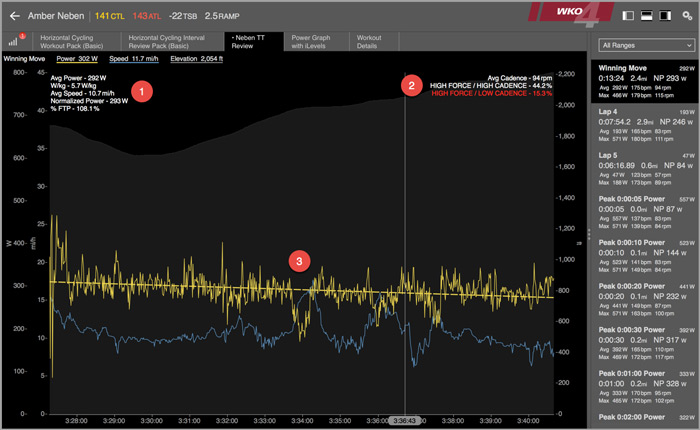 I identified the winning move, seen in the screenshot about, to compare it against her time trial effort. As you can see, she took a solid dig at the bottom of the climb and was able to solo away from the peloton a few kilometers from the top. It’s important to note that the winning move occurs 3 hours and 27 minutes into the race. She already had seventy miles in the saddle before she hit the bottom of the climb.

Amber’s average power for the winning move was 292 watts, basically the same power output as the previous day’s time trial effort. This shows the depth of her fitness and ability. Five days into the race, hours into the stage, she can still go deep when needed.

If we look at her cadence distribution, we do see some fatigue. She attacked the bottom of the climb pretty hard, and as you can see she paid the price later. She wasn’t able to maintain her high-cadence/high-force pedaling, as she was in the zone 44.2 percent of the time vs. 55.9 percent during the time trial the day prior. The hard early push to set up the breakaway created some fatigue, but her overall power output was still able to get the job done.

Amber soloed in for the win and ended that day with a 57-second lead over her nearest competitor. With a strong team effort and some smart riding, she safely finished in the lead pack on the final two stages, taking the overall win by the same margin.

Finally, a big thank you to Amber for sharing your data file with the public, and for showing us all just how powerful women cyclists can be! Amber is a two-time Olympian, the 2008 UCI time trial world champion, and the 2003 U.S. national road champion and 2012 national time trial champion. She is also a coach, founding and operating Px4 Coaching

About Tim Cusick
Tim Cusick is the TrainingPeaks WKO4 Product Development Leader, specializing in data analytics and performance metrics for endurance athletes. In addition to his role with TrainingPeaks, Tim is a USAC coach with over 10 years experience working with both road and mountain bike professionals around the world. You can reach Tim for comments at tim@wko4.com. To learn more about TrainingPeaks and WKO4 visit us at TrainingPeaks.com.
#CYCLING#DATA-ANALYSIS#PERFORMANCE