This base training Olympic triathlon plan will provide you with the foundations of the aerobic training period, which is characterised by increasing volume, performed at relatively low intensities.

This phase has a strong emphasis on general conditioning, and physical, mental and technical skills such as working on your swim technique, improving your cycling efficiency, or working on running cadence or technique

You might be a beginning triathlete or maybe you have a couple of races under your belt from previous seasons. In either case you are fit and are NOT a beginning athlete.

Before beginning Week 1 of the plan you are capable of riding a bike 30 to 60 minutes two days a week and completing a long ride around two hours on a third day.

You can swim 100 yards (or meters) nonstop and swimming for 30 minutes a couple of times per week is easy. You can run two days per week, one 30-minute run and a longer run of 45 minutes.

Weekly training hours range from 5:15 to a maximum between 8:15 and 11:00. There is some flexibility built into the plan to accommodate individual differences.

For example there is no time posted for the swim workouts. Obviously there can be big differences in swimming abilities between people with a competitive swim background and those just getting into swimming.

Some of the run and bike workouts also have ranges built into the workouts. 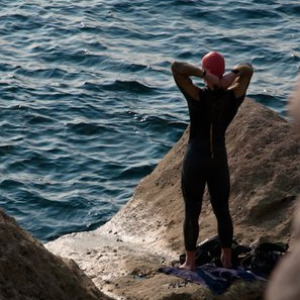 Isolated Leg Training on trainer. After warm-up, alternate 20-60 seconds with 1 leg--other on a chair. Get a total of 7-10 minutes of ILT on each leg in workout. Alternate legs as you feel like it. Comfortably high cadence. Focus on eliminating dead spot at top of stroke by pushing toes forward in shoes at top.

Spin-ups. Slowly spin-up to max rpm over 30 seconds. When you begin to bounce, back off and then hold it for several seconds. Recover completely and repeat several times. Stay RELAXED!

BT: Warm up 5-10 minutes. Then 3-4 sets of MS. Cool down 5-10 minutes spinning in easy gear/resistance at high rpm. For details go to START (above), WORKOUT DESCRIPTIONS or TRAINING, PRINTABLE VIEW OF WORKOUTS or see Joe Friel's Training Bible book.