This plan is to prep you for the Whiskey 50. The plan encompasses not just on the bike work, but equally as important off the bike work, to make the athlete strong and stable.

The plan works in 4 week blocks, of a 3 week build with the 4th week being a recovery week. The plan starts out laying down an aerobic foundation, then building into higher intensities. A big goal in this plan is to prep the athlete to be able to throw down some punchy efforts and then back that up with a long steady tempo effort. This mimics the Whiskey 50 pattern of single track, to long fire road climb (Skull Valley!!).

The plan will work best for the athlete who has been riding and has some base coming into it. It is designed with the working athlete in mind, keeping rides at 90min or less during the week, and getting the volume in on the weekend!

Both power and HR zones provided, power not necessary but will help the athlete get the most out of the efforts. 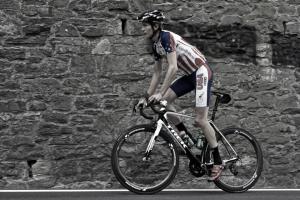 I love bikes, in any and all forms. For me it is as simple as that. I've built my life around cycling, and to have it be my livelihood is a privilege. At this point I've worked with a wide range of athletes from people chasing a PR in their local century, to MTB racers, to WTS triathletes and World Tour Road Racers. I love it all.

This routine doesn't take a lot of time, but is challenging and works. The focus is all on the posterior chain (read back, glutes, hamstrings). This will make you a better handler on the bike, better climber, and help cut out lower back pain. These are the muscle groups that cyclists often ignore, and pay the penalty for.

Do some foam rolling and stretching after the foundation routine.

Steady zone 2 effort, working on establishing that aerobic base!

Don't be lazy today and focus on smooth power production, using core to stabilize yourself on the bike.

I will put in RPE (rate of perceived effort, on a scale of 1 to 10) for the first week, until the field test. Then your zones should be established!

Progressive warmup, starting easy and building into z2 before the efforts.


For efforts today do 6x20 sec stomps w/ ~2min rest between each stomp.

The stomps should be performed in the saddle the whole time. Start in a big gear from a low speed and then accelerate as hard as you can. It should take you awhile to get on top of the gear. Focus on using your core to keep your upper body smooth and transfer all the power into the pedals.

Steady zone 2 effort, working on establishing that aerobic base!

Don't be lazy today and focus on smooth power production, using core to stabilize yourself on the bike.


1min straight plank, 30sec side plank each side


1x30sec, laying flat on back hold legs straight 6inches off the ground


1x15 leg lifts, on back legs straight raised up and down


1x10 reps each leg, standing on one foot bend at the waist and touch the ground with opposite hand 10inches in front of foot

Progressive warmup, start light and build into zone 2 before the efforts.

Space these to fit the terrain with a minimum of 6min recovery between.

The goal of today's ride is to log some steady endurance miles on the trails. Focus on keeping steady pressure on the pedals where possible, and riding smoothly through technical sections.

Majority of the day should be zone 2 pace. Ideally use HR as a guide, riding on trails power will be highly variable.

If you don't have terrain/weather available to ride trails, do the same workout on road.