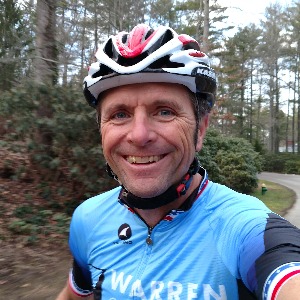 Randy Waren Warren Cycling LLC
Have a Question? - Contact Me Contact Me
Coach Summary Meet Your Coach Training Plans Contact
Coach Summary
Refund Policy
Plans are protected by our Refund Policy and may, with the author's approval, be exchanged for a plan of equal value from the same author.
Location

Warren Cycling is cycling at its best. Whether you join us for one of our camps or establish a long-term relationship through individual coaching, we are confident that you will become a better cyclist and find a more fulfilling relationship with cycling through our services. Warren Cycling helps you to bridge the gap from where you are to where you want to be. We help you to reach your cycling goals through outstanding experiences.

Warren Cycling camps and coaching are owned and operated by Randy Warren. Coach Randy holds the highest level of coaching certification by USA Cycling. He has been a competitive Category I/II USAC cyclist for almost 30 years, earning a National Championship on the track in 2005 and Gold Medal at the Russian Masters World Cycling Championship in 1994. Coach Randy has coached collegiate cycling teams (Cal Poly SLO 1991-2000 and University of Redlands 1987-1990), USA Cycling teams (xXx Racing-Athletico 2001-current and Downtown Asheville Racing Club 2015-current) as well as hundreds of individuals including an Olympian, World Championship medalist, numerous National and State Champions, juniors, masters, women, amateurs and professionals. Coach Randy uses a goal oriented approach to clearly identify what an athlete wants to accomplish and then carefully creates an overall and detailed plan to achieve those goals.