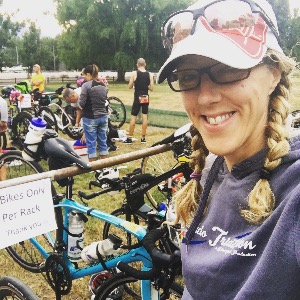 Lisa Ingarfield Tri to Defi Coaching and Consulting
Have a Question? - Contact Me Contact Me
Coach Summary Meet Your Coach Contact
Coach Summary
Refund Policy
Plans are protected by our Refund Policy and may, with the author's approval, be exchanged for a plan of equal value from the same author.
Location

Sport Types
Services
Athlete Requirements
Athletes willing to be communicative, honest, and committed. Athletes looking to improve their times, or try a new distance/sport. Women athletes are a focus of mine.
Meet Your Coach

There is much we can achieve with the right support and guidance. Balancing work, life, family, and other commitments can be tough. My goal is to build strong and supportive coach-athlete relationships rooted in open communication, attention to detail, active listening, and understanding an athlete's individual needs. By providing individualized training plans and ongoing feedback, you can train consistently and with flexibility, making progress towards, and ultimately achieving, your goals.

Growing up in the United Kingdom where the sun doesn't shine very much, I came late to the sport of running. In my early-mid twenties, I trained as a kick boxer, achieving my brown belt before moving to the U.S. In 2003, I moved to Colorado and continued to run and cycle on and off because the weather was much more inviting. However, my attempts continued to lack traction. In 2010, a friend of mine shared a one month training plan designed to get folks able to run continuously for 20 minutes. I persevered through the run/walk program and finally my efforts stuck. A year or so later, another friend expressed interest in doing a triathlon. I owned a mountain bike and didn't really know much about the sport. That summer, I competed in two triathlons (mountain bike and all), a few more in 2012 and 2013 and then I decided to get serious and hired a coach in 2014.

I joined Rocky Mountain Triathlon Club in 2015 and was accepted onto the Runner's Roost Triathlon race team for 2015 and 2016. For 2017, I joined Vixxen Racing's all women triathlon team. I have competed in over 25 half marathons, 7 marathons, 4 half iron distance triathlons, and numerous sprint & Olympic distance triathlons. I've qualified for the USAT Olympic Distance National Championships four years in a row. I am a RRCA certified run coach and will be completing my USAT Coaching certification in May 2017.