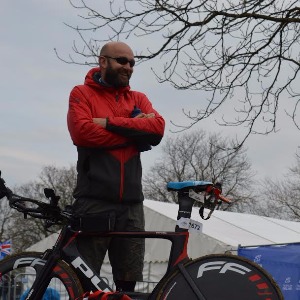 Matthew Tithecott Tri Mr T Coaching
Have a Question? - Contact Me Contact Me
Coach Summary Meet Your Coach Contact
Coach Summary
Refund Policy
Plans are protected by our Refund Policy and may, with the author's approval, be exchanged for a plan of equal value from the same author.
Location

Not only is Mr T a Level Three BTF coach, but a member of BASES (www.bases.org.uk). This modern approach is also supported by studying for a MSc in Sports Science for Optimal Performance at the University of Kent. All this updated knowledge leads to an ever evolving coaching philosophy , which is represented in our training plans and sessions.

Why spend thousands of pounds on the latest equipment and only save seconds, when you can save minutes with an effective progressive training programme ?

Matt is a fully insured BTF level three coach as well as qualified PE at a local Canterbury School. As a Sport Science graduate and over twenty years Coaching and Teaching experience he comes with a wealth of knowledge about Training, Physiology, Bio Mechanics and the Phychology of sports and performers. As well the ability to deal with groups of all ages and abilities.

He is currently head coach of the Canterbruy Institue of Sport Triathlon Academy as well as regional coach for Ocean Lake Triathlon.

The Triathlon Academy has been built on the high level of performance shown by the students at Simon Langton Grammar School for Boys over a sustained period. This has included National Schools U14 champions in 2012, Kent U13 & 14,Biathlon champions over 2012, 2013 & 2014 as well as six different students being selected for Great Briatain Age Group

As part of Ocean Lake Triathlon, Matt coordinates a wide package of training for athletes of all ages and abilities, training within the Canterbury area. These athletes benifit from Matts' experience of working athletes relativley new to triathlon and is able to share his recent experience and 'mistakes' made in training and competing. His sessions are differentiated for all abilities and has a real passion for 'everybody' being able to join in and have fun, while training effectively for their goal. Whether they are regular Ironman athletes or anxious novices who haven't exercised since school (or ever before).