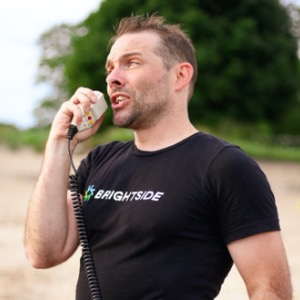 As a coach, I focus on the whole athlete, understanding that more goes into the experience than just swimming, biking and running. I like to work with athletes who have dipped their toes in the triathlon waters and want to take their season to the next level, whether that's going longer, getting stronger in their weakest discipline, or just streamlining the training calendar in order to be faster, fitter, and happier in the sport.

I came to triathlon, or any sports for that matter, later in life. I was a theater kid who did marching band in high school and there were no organized sports at my college but women's rugby.

At 30, I had just moved to Chicago for grad school and saw advertisements for the Chicago Tri. It seemed like a novel way to spend a summer, so I signed up. I'd never run a 5k, I didn't put my face in the water when I swam, and the only biking I did was as a kid on a busted up huffy with no helmet.

Though the Summer was great, my first race was less than amazing. Wanting to do better is what got me to sign up for another race. And I never stopped signing up for races, completing 58 up to today. Which is surprising as someone who didn't put his face in the water when he swam ten years ago. Five years into my racing career, I got certified as a coach.

My methodology is to focus on the thing that scares you the most and conquering it, whether that's swimming, hills, wind, or long distances. I've coached athletes from sprint to Ironman, age group to professional.

I am USAT Level 1 Certified, US Masters Swimming Level 2 Certified and Adult Learn to Swim Certified. I've completed TrainingPeaks University and use their metrics and methodologies to the fullest.

I've seen people who want to get fitter and faster, but were intimidated by the process of having a coach, fearing they weren't "good enough". These were the athletes I wanted to reach, and still want to reach.