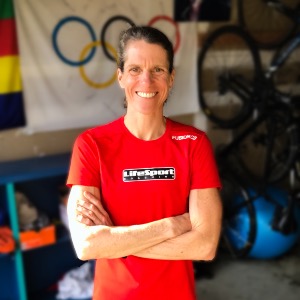 Juliet Thompson Hochman LifeSport Coaching
Have a Question? - Contact Me Contact Me
Coach Summary Meet Your Coach Coach Package Pricing Contact
Coach Summary
Refund Policy
Plans are protected by our Refund Policy and may, with the author's approval, be exchanged for a plan of equal value from the same author.
Location

Juliet grew up playing many sports, focusing on rowing in college and competing on the 1988 U.S. Olympic Team. After several decades of starting and leading non-profits, raising two sons and supporting her husband's career around the world, Juliet returned to international competition as a triathlete. With success at USAT, ITU and Ironman events in triathlon, Juliet turned her focus to creating an elite women's triathlon team in Portland and coaching both newcomers and veterans in multi-sport.

"I love leveraging my experience as a lifelong athlete at multiple levels to help newcomers to triathlon fall in love with the sport and seasoned athletes reach their goals. I understand the importance of balancing life, family and training and one of my value added offerings as a coach is helping athletes figure out how to fit workouts into their busy schedules. I believe anyone can find success in triathlon and I get excited playing a part in each athlete's journey as an active and enthusiastic partner, making training and racing fun and rewarding."