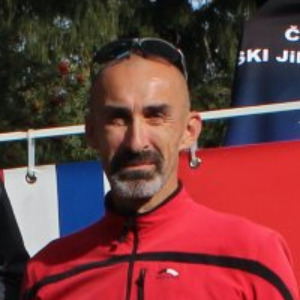 Coach Summary Contact
Coach Summary
Refund Policy
Plans are protected by our Refund Policy and may, with the author's approval, be exchanged for a plan of equal value from the same author.
Level 1 Coach

Focused to running and general fitness targeted to four groups of clients - athletes:

My sports background goes to childhood and youth, from the age of 9 to 21, when I was involved in athletics. Later, from the age of 30, I focused on mountain biking and later on road cycling. Since 2003 it has led to triathlon - sprint, Olympic, half ironman and several times also "full-size" ironman, last but not least Xterra. Since 2008, running has been predominant and my main focus has been mountain and trail running, which continues to the present day. I also did a few ultrarations, mostly in the Alps.
Since 2016, I have been training a group of children in athletics and general sports skills. Today this groups comprises of 17 children. At that time, I also started training adult athletes at individual bases focused on different distances, but mainly on marathons and trail runs. In my adult sports career since 1998, I have completed more than 220 races, during which I covered 12,000 km in almost 900 hours.
My qualification as a trainer comes from many certified courses, including a personal and fitness trainer license, children's sports, off-track running, etc .; I mostly took part in courses at the Faculty of Physical Education and Sport, Charles University in Prague, Czech Republic. Here I also obtained a nutrition consultant's license in 2020.
My biggest coaching success is on the one hand satisfied sports children, and then a friend who wanted to try a marathon 5 years ago. He managed it in 3:56 and after 5 years he has a personal record of 3:09.