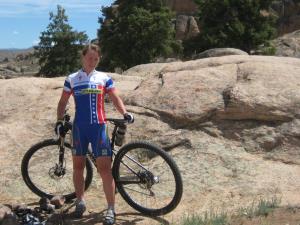 Tracy Thelen Thelen Coaching
Have a Question? - Contact Me Contact Me
Coach Summary Meet Your Coach Training Plans Contact
Coach Summary
Refund Policy
Plans are protected by our Refund Policy and may, with the author's approval, be exchanged for a plan of equal value from the same author.
Location

Sport Types
Services
Athlete Requirements
An open mind, the willingness to challenge yourself and the understanding that it's a lifelong process
Meet Your Coach

Thelen Coaching was founded by Tracy Thelen, the 2014 USAC 24 Hour Mountain Bike Women's Solo National Champion and 2015 Vapor Trail 125 women's winner. She comes from a strong endurance background, having completed a marathon in all 50 states, plus DC. She is a two time iron distance triathlon winner and competed in the 2008 Ironman World Championships. In 2010 and 2011, she placed in the top ten of the Xterra USA Pro Series, showing her versatility to succeed in a variety of sports.

It's not just about the podium though - it's also about the active lifestyle and being able to have fun doing what you love. It's the training required to achieve your goals, the skills needed to cross the finish line and the preparation to face any challenge. Add those all together and it equals success!

Thelen Coaching Athletes have broken through mental and physical barriers - finishing races such as the Arrowhead 135 Fatbike race in International Falls, MN; placing in the top 10 of Singlespeeder at the 24 Hours in the Old Pueblo; and placing in top 5 in the tandem class of the Dirty Kanza 200.

Preferred Athlete Levels
Beginner, Intermediate, Advanced, Professional
Training Plans
Showing 3 of 15 plans View all plans
Plan Level Guarantee
Plans are protected by our Refund Policy and may, with the author’s approval, be exchanged for a plan of equal value from the same author.
View all plans
Have a question? Contact me.