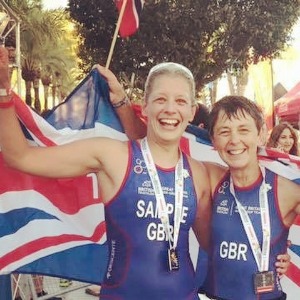 Tracey Sample the247triathlete.com
Have a Question? - Contact Me Contact Me
Coach Summary Meet Your Coach Coach Package Pricing Contact
Coach Summary
Refund Policy
Plans are protected by our Refund Policy and may, with the author's approval, be exchanged for a plan of equal value from the same author.
Location

Triathlon coaching for athletes with specific challenges such as shift work or family constraints.
Remote coaching
Specialist in getting athletes over fears and technical issues in biking and open water
Rehab coaching and return from injury coaching
Personal goal setting to grow athletes to better at their sport and to achieve better balance in their lives.
Success is an athlete who is less tired and is performing better.
I offer the TP Bronze, Silver and Gold packages of coaching

Competing in triathlon since 2004 and coming from a background of no sport or any activity for over 15 years, I started all 3 disciplines of triathlon from scratch.
Despite spending 18 months at the back of the field, including being dead last in the final race of 2005, I was hooked on triathlon and has gradually improved.
First qualifying for Team GB in 2007, I have competed in many major championships & IM 70.3 races all over the world.
After difficult 6 years out with serious injuries & 2 hip operations, I returned to competition, and have competed in Triathlon, Duathlon, Aquathlon and Aquabike World Championships and European Championships since then.

A typical front of pack Age Grouper will train the swim, bike & run for 10-20 hrs per week. At The 24:7 Triathlete, we believe that what you do in the remaining 148-158 hrs will dictate how successful you are. Nutrition, sleep, S&C and a myriad of other factors will dictate whether you can achieve your triathlon goals and fulfil your athletic potential, but are an area that often gets over-looked.

A British Triathlon level 3 coach who has been coaching for 30+ years with a passion for getting people to try sport who was awarded Triathlon England’s North East Coach of the Year 2013, 2015 & 2018. Tracey believes in a balanced programme of training with particular attention being given to being strong enough to withstand the rigours of training and getting the rest and recovery needed to carry on.