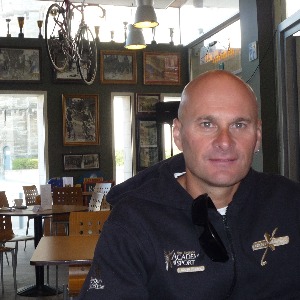 Terry Gyde Terry Gyde Coaching
Have a Question? - Contact Me Contact Me
Coach Summary Meet Your Coach Contact
Coach Summary
Refund Policy
Plans are protected by our Refund Policy and may, with the author's approval, be exchanged for a plan of equal value from the same author.
Location

Hi there, I am a professional cycling coach and my expertise is endurance Track Cycling and Road cycling. I am based in New Zealand, but coach remotely around the world. Please check out my website Terry Gyde Coaching.

I have educated myself and hold CANZ level 1,2, and 3 certificates as well as Australian level 2 qualifications. I was awarded a Prime Ministers scholarship to travel the world and learn best coaching practices by some key countries. I have also attended some key coaching conferences and workshops around the world, working a long side some of the best coaches and riders in the world.

Since leaving international coaching I have set up my coaching business and are developing the finest youth and masters cyclists in the world, and working at grass roots level developing New Zealand cyclists to the highest possible level.

The secret to my success is that I work with very limited numbers so those who I do coach get personalised training and attention as opposed to a copy and paste method used by some with large numbers.