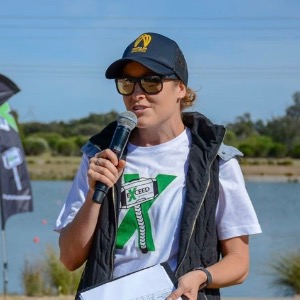 Michelle Tickner Team 360 Performance
Have a Question? - Contact Me Contact Me
Coach Summary Meet Your Coach Contact
Coach Summary
Refund Policy
Plans are protected by our Refund Policy and may, with the author's approval, be exchanged for a plan of equal value from the same author.
Location

Generic coaching will only get you so far. And when you've reached that point, you need specificity in order to keep progressing, and that's where I come in!

I work exclusively with experienced athletes whose primary focus is half and full distance racing, and are ready to progress beyond generic squad sessions and programs.

If you're intrinsically motivated, have a growth mindset, prepared to work damn hard, and love this sport and the lifestyle it brings, then we will work well together!

Michelle Tickner, is the Head Coach and Founder of Team 360 Performance, and is one of a small group of female coaches in Australia who hold a Performance Coaching Accreditation ('Level Three') through Triathlon Australia.

Michelle began in the sport like many coaches, as an athlete some 20 years ago. Her carer as an athlete includes a World Short Course AG Title (Gold Coast, 2009) through to an AG podium at the IM World Championships in Kona (2013).

Michelle competed as a professional triathlete from 2014 - 2017, and achieved multiple 70.3 and IM podium results amongst the pro ranks during this time.

In 2015, Michelle began coaching other athletes and in 2017 made the decision to retire as a professional athlete and move into coaching full time. Since she began coaching Michelle has relentlessly pursued her professional development and has acquired her Foundations, Development and Performance coaching accreditations through Triathlon Australia. Making Michelle one of a small group of female coaches in Australia with such a high level of accreditation.

Michelle prides herself on the relationships she has built as a coach and the results this has helped her athletes to achieve.

Michelle is 100% invested in each of her athletes, which shines through in her passion, enthusiasm and their results.