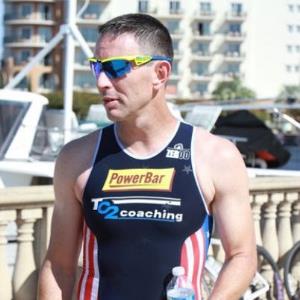 Tim Crowley TC2 Coaching LLC
Have a Question? - Contact Me Contact Me
Coach Summary Meet Your Coach Training Plans Contact
Coach Summary
Refund Policy
Plans are protected by our Refund Policy and may, with the author's approval, be exchanged for a plan of equal value from the same author.
Location

Tim Crowley BS, CSCS, RSCC PES,
TC2 Coaching LLC
Montverde Academy Head Strength and Conditioning Coach
Tim has been coaching triathletes since 1993. He has been a pro and elite age grouper for 30 years.
Tim is the Head Strength and Conditioning Coach at Montverde Academy in Central Florida, and is the Owner of TC2 Coaching and Consulting LLC. He was a 2008 Olympic Triathlon coach. He has coached athletes to World Championships, Ironman Championships, ITU Worlds Triathlon Series gold, Duathlon World Champions numerous National Championships at the Elite level...
Tim was the 2009 USA Triathlon Elite Coach of the Year, and 2007 USA Triathlon Development Coach of the Year. He holds Elite coaching licenses with USA Triathlon and USA Cycling, as well as certifications with National Strength and Conditioning, American Swim Coaches Association and National Academy of Sports Medicine.
As the Head Strength and Conditioning Coach at Montverde Academy, Tim is responsible for the training and conditioning for all varsity and Academy teams. In his first 4 years, MVA teams have won 8 National Championships. He has coached athletes who are playing in the NBA, Major League Soccer, and European Professional Soccer. This includes the 2nd overall pick in the 2015 NBA draft (D’Angelo Russell) and projected #1 NBA draft pick ( Ben Simmons).
Tim is also a frequent speaker at national Conferences and clinics. His articles have appeared in all major Triathlon publications.