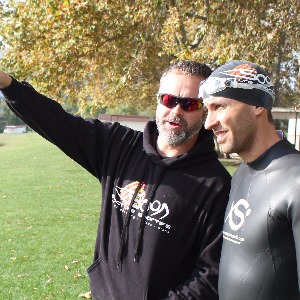 Richard Laidlow Sancture-Sportifs.com
Have a Question? - Contact Me Contact Me
Coach Summary Meet Your Coach Training Plans Contact
Coach Summary
Refund Policy
Plans are protected by our Refund Policy and may, with the author's approval, be exchanged for a plan of equal value from the same author.
Location

Triathlon is my main expertise, but increasingly I am coaching Duathlete's, Cyclists and Runners.

Richard has been a Professional Coach since 2004. He is a Certified TP Coach, and holds Ironman University, British Triathlon and British Cycling Coaching Qualifications. Richard has gained a vast knowledge and expertise as an elite athlete (swimming and triathlon) as well as being a RAF Physical Training Instructor.(Whilst in the RAF he was part of the relay team who broke the world record for the Belgium to England Channel crossing and has completed numerous other channel swims).His additional experiences as a lecturer in sports science and as a personal trainer (YMCA qualified) give him exceptional practical and theoretical knowledge. In addition to his coaching Richard still competes regularly in all disciplines and is the head coach for the local club “Triathlon Catalan”.Uniquely Richard's athletes can also train with him (year round and whenever they wish) at his base in the South of France (http://www.sancture-sportifs.com).