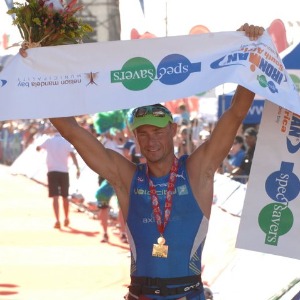 Raynard Tissink TeamTissink Triathlon
Have a Question? - Contact Me Contact Me
Coach Summary Meet Your Coach Contact
Coach Summary
Refund Policy
Plans are protected by our Refund Policy and may, with the author's approval, be exchanged for a plan of equal value from the same author.
Location

Team Tissink Triathlon Academy is run by Raynard and Natalie Tissink, based in the Ironman city of Port Elizabeth, South Africa.
We offer coaching for all levels of athletes from beginners through to elite athletes.

Raynard's wife, Natalie brings over 25 years of teaching, coaching and racing experience in swimming and triathlon.
Natalie is a past South African National swimming champion, a Springbok life saver and South African triathlete – with numerous victories both locally and internationally.
Natalie started the online Team Tissink Coaching business in 2006 when Raynard was still racing professionally, and built up a steady following of athletes.
She swam competitively for 13 years before starting to compete in triathlons.
Natalie started coaching swimming at the age of 18 and by 20 had franchises in 5 venues around Jhb.