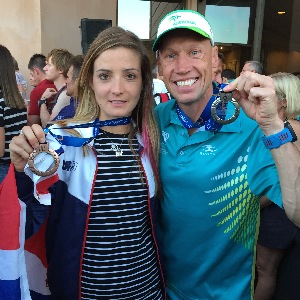 Michael Pratt ASF Triathlon
Have a Question? - Contact Me Contact Me
Coach Summary Meet Your Coach Contact
Coach Summary
Refund Policy
Plans are protected by our Refund Policy and may, with the author's approval, be exchanged for a plan of equal value from the same author.
Location

I am the Performance Director of ASF Triathlon which has been proving triathlon and endurance sports coaching in Melbourne Australia for over 20 years. We offer squad training, 1-1 sessions, performance analysis and training programs to triathletes, runners, swimmers and cyclists. I am also the Head Coach at YarraTri one of Australia's biggest training programs and most successful clubs.

Coming from a sports science background and with a degree in Sport Science from Brunel University in London, UK our philosophy is to follow clear scientific guidelines to achieve success. We have had over 100 athletes selected on National teams for the ITU World Triathlon Championships, with the overall winner of the women's age group race in Auckland and multiple medallists. In long course racing we have had many 70.3 race age group race winners and qualified a number of athletes for the Hawaii Ironman. In addition to triathlon training we train runners from cross country events up to marathons. Our swimmers compete in Masters meets, open water swim races and take on challenges such as swimming the English Channel.