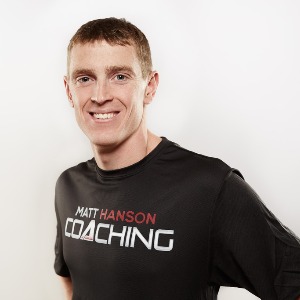 Matthew Hanson Matt Hanson Coaching
Have a Question? - Contact Me Contact Me
Coach Summary Meet Your Coach Contact
Coach Summary
Refund Policy
Plans are protected by our Refund Policy and may, with the author's approval, be exchanged for a plan of equal value from the same author.
Location

Dr. Matt Hanson races as a professional triathlete and coaches triathletes, cyclists and runners. Matt has an extensive background as an athlete and is highly-educated in all things sports-related. He has worked as an Athletic Trainer and Human Performance Program Director at a Division 3 University and taught classes in Sports’ Nutrition, Physiological Principles of Conditioning, and Exercise Physiology. Matt’s background and training record make coaching a natural fit for him. Matt has been coaching since 2013 and has helped triathletes reach their goals at each of the different triathlon distances. He has also coached runners, swimmers, and cyclists to bring out their single sport potential.

As an athlete, Matt comes from a running background. In his first year as a pro, Matt set 3 course run records and was the 2014 Ironman Chattanooga champion. In 2015, he was crowned North American Champion with his win at Ironman Texas where he set the overall course record. He is committed to winning at the highest levels in the sport as well as coaching athletes to reach their performance and health related goals. You can follow his athletic journey at www.matthansontri.com.