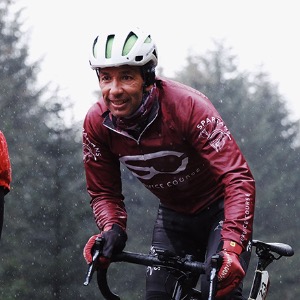 My company Service Course not only deliver unique, enjoyable and exciting executive cycling and triathlon events but we are also fully engaged with supporting athlete development through specific coaching input relevant to individual needs. We enhance completely, your enjoyment of bike riding and through our professional coaching network, help deliver expertise in swimming and running.

Being a coach with successful Olympic and Commonwealth Games experience helps me to deliver exceptional performance as I seek to provide optimal answers to problems athletes of all levels look to solve.

2013 - 2019; 6 years as Endurance Coach with Scottish Cycling helping to lead the team to a record haul of 10 cycling medals in the Gold Coast Commonwealth Games. Included in this unprecedented success was helping Mark Stewart to an historic Points Race Gold as he obliterated a star studded field including the home nation "certainty" and multiple world champion Cameron Meyer.

With the excitement around Mark's win, helping Katie Archibald to also claim her first ever Commonwealth gold in the Individual Pursuit with a personal best and Games Record almost went unnoticed as did my work with her brother John in claiming silver in the men's Individual Pursuit in a ridiculously stacked field less than 12 months after riding on a velodrome for the first time. Helping John to solve the problem of becoming a fast-tracked world class athlete was truly one of my most rewarding personal coaching achievements.

I am also extremely proud of helping both Brownlee brothers, Alastair and Johnny, on their ways to becoming Olympic and World Champions with my work for British Triathlon as their Cycling Coach between 2004 - 2008. This included attending the Beijing Olympics with Alastair aged 18 for him to gain invaluable experience for his success in London 2012.