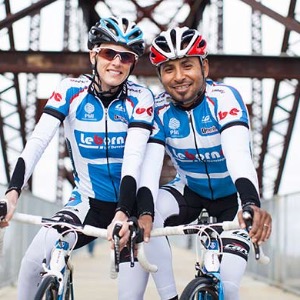 Leborne Coaching specializes in cycling and triathlon endurance sports. Whether your goal is to turn pro, finish a century, win your Cat 3 regional criterium, or complete your first Ironman, we understand that coaching goes beyond handing out a workout plan. We believe athletes at all levels benefit not only from a strategic plan, but from sound advice on form, efficiency, and confidence mentally and physically.

ERNIE LECHUGA has ridden bikes for 30 years. His talent as a rider blossomed early, and at the age of 14, he won Junior Nationals. A few years later, while representing the Mexican National Team, he won the Mexican National Time Trial Championship. He went on to race for the Mercury Cycling Team, Defeet-Lemond, and Jelly Belly Pro Cycling Team. He's also competed in Ironman triathlons. Ernie may have retired his pro status, but his whole life still revolves around cycling. Ernie now fuels his competitive spirit by helping others achieve their goals. He has a firm understanding of cycling and triathlon, as well as what kind of dedication it takes mentally and physically to achieve top-level performance.

SCOTTI LECHUGA came from a competitive running background, but met Ernie in 2009. He convinced her to try cycling and began coaching her. In 2011, they had their twin sons, Eli and Ethan, and Scotti was back to to racing the following year. Scotti raced with the US National Team in 2013 for the Tours of Limousin, Bretagne, Ardeche, and Toscana. Scotti has raced with pro teams Tibco, UnitedHealthcare, and for 2016 signed with Hagens Berman | Supermint UCI Women's Team. Scotti shares her passion for sport with all of the Leborne athletes. As a coach, she understands the mind of the athlete and wants to equip each individual to reach his or her potential.