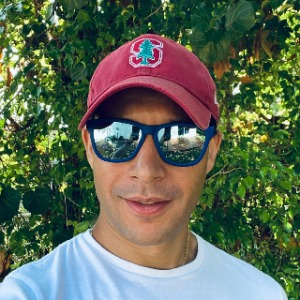 Mac Pina Leap Fitness Consulting
Have a Question? - Contact Me Contact Me
Coach Summary Meet Your Coach Training Plans Contact
Coach Summary
Refund Policy
Plans are protected by our Refund Policy and may, with the author's approval, be exchanged for a plan of equal value from the same author.
Location

For years Mac Piña has been training athletes to attain their goals. Mac uses his real-world experience as a dad, husband, and triathlete to help busy people of all levels reach their fitness targets and properly train for anything between a 5k to an Ironman. He likes placing special interest in instilling good fitness habits that remain with his athletes beyond race day.

Coach Mac crafts training plans and also accepts athletes for 1-on-1 coaching for ongoing fitness or for specific races.

Mac Piña started running in high school, where he competed in track events, his favorite one being the 400-meter hurdle race. Shortly after, he started following his father’s marathonic footsteps and began doing half marathons and later marathons. A few years later he branched out and started competing in triathlons as well. Sometime along the way, he started studying, creating training plans, and coaching friends and family and fellow athletes.

Mac has completed hundreds of endurance races, including marathons, team adventure races, and triathlons of various distances. He is the proud father of two amazing boys and husband of a fantastic woman. As a coach, Mac loves using his real-world experience to help busy people incorporate training and good fitness habits into their lives so they can enjoy life to the fullest with their loved ones.

In addition to coaching athletes, Mac works in finance. He has a bachelor’s degree in Electromechanical Engineering from the Universidad Iberoamericana and a Master’s degree in Business Administration from Stanford University Graduate School of Business. He is a USA Triathlon Certified Coach, a TrainingPeaks Coach, and a Certified Personal Trainer from the National Academy of Sports Medicine with several specializations.

Preferred Athlete Levels
Beginner, Intermediate, Advanced
Training Plans
Showing 2 of 2 plans View all plans
Plan Level Guarantee
Plans are protected by our Refund Policy and may, with the author’s approval, be exchanged for a plan of equal value from the same author.
View all plans
Have a question? Contact me.