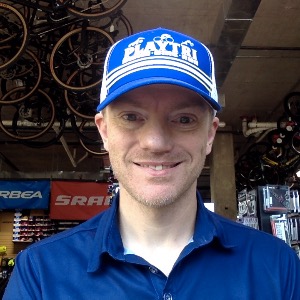 Coach Jim Rowe is a Playtri Level 2 Coach and also a UESCA certified triathlon coach. He is a former collegiate soccer player with 15+ years of experience in triathlon, 20+ years in running, and 6+ years in competitive swimming. He is a seasoned endurance athlete and an ardent student of endurance sports.

An active lifestyle has always been an important aspect of Coach Jim’s life. He grew up as a four-sport athlete and went on to play soccer at the collegiate level. After completing his collegiate soccer career in 2003, he got into triathlon as a way to keep active. Although Jim made some horrendous mistakes during his first year racing triathlon (he wasn’t working with a coach), he had been bitten by the triathlon bug and has been racing ever since.

As a coach, Jim is detail oriented and focuses on helping his athletes to master and understand foundational skills that help them achieve their athletic goals. He has considerable experience in coaching people of all ages in numerous sports, ranging from coaching youth in soccer, basketball, and triathlon to coaching adults in running and triathlon. He understands the importance of finding ways to fit triathlon into a life filled with family and work commitments in a sustainable way; his previous career had long, odd hours and he has a wife who works full-time and two young children. Coach Jim knows what it takes to be a successful triathlete in a time-crunched life and he works diligently to help his clients maintain a healthy work, family, and athletic balance.

All coached athletes must have a heart rate monitor.