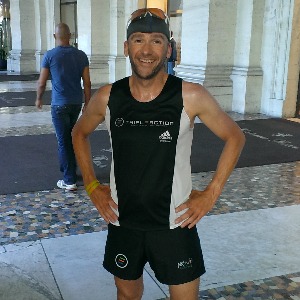 Jean-Luc Mejane TRIPLEACTION
Have a Question? - Contact Me Contact Me
Coach Summary Meet Your Coach Contact
Coach Summary
Refund Policy
Plans are protected by our Refund Policy and may, with the author's approval, be exchanged for a plan of equal value from the same author.
Location

Hi, I was born in France, played basket-ball competitively during 20 years. I graduated from an engineering school in 1995 and worked in China during 16 months. In 2002 I moved to Canada and worked there as project manager in Infomation technology. In 2006 I became spinning instructor and started triathlon. Since then I've completed more than 100 races (1500m track, all road races from 5k to 5x marathons, cross country, trail races but also sprint triathlons and duathlons, Olympic, half Ironman, 4x Ironman and Powerman distances). I qualififed for Worlds in sprint triathlon, sprint duathlons and long distance duathlon (Powerman Zofingen) and for the New York City marathon. I eat a vegan diet since 2016.