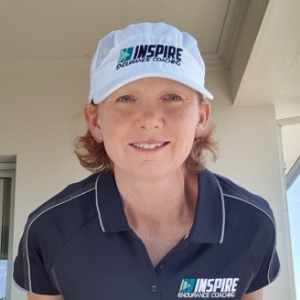 Delwyn Madge Inspire Endurance Coaching
Have a Question? - Contact Me Contact Me
Coach Summary Meet Your Coach Contact
Coach Summary
Refund Policy
Plans are protected by our Refund Policy and may, with the author's approval, be exchanged for a plan of equal value from the same author.
Location

Inspire Endurance Coaching is dedicated to helping you achieve all of your triathlon, swimming, cycling and running goals. Whether your goal is to participate in your very first triathlon or single discipline event, improve your age group rankings, race a World Championship, or compete in Ironman, I can help you on the way to achieving all your multisport goals.

Coach Del has been involved in Triathlon for 30 Years. Starting as a team cyclist she grew to love the sport, seeking to improve her swim and run. The first 15 years were about short and fast racing, it was here Del learned how to master speed training and recovery during a high-frequency race schedule. Del performed well in short course triathlon placing in both race and series events. In 1997 Coach Del qualified in Queensland as an Australian Level 1 Triathlon Coach. During this time she became head coach of a small Brisbane Triathlon club and relished in introducing novices to the sport.

She has coached many athletes, from novice short course athletes to seasoned Ironmen and those overcoming significant diversity to reach their dreams. Del's strength is her ability to understand athletes, their schedule, their strengths, and limitations to bring out the best.