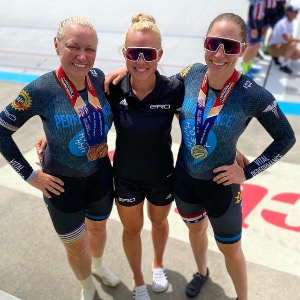 Missy Erickson ERO Sports
Have a Question? - Contact Me Contact Me
Coach Summary Meet Your Coach Contact
Coach Summary
Refund Policy
Plans are protected by our Refund Policy and may, with the author's approval, be exchanged for a plan of equal value from the same author.
Location

Experienced Coach with a demonstrated history of working in the sports industry. Skilled in Coaching, Cycling, Leadership, Bicycle, and Aerodynamics. Strong community and social services professional with a Bachelor of Science - BS focused in Kinesiology and Exercise Science from Fort Lewis College.

Missy began cycling at the age of 15 in her home state of Minnesota, competing as a junior before being awarded a full scholarship to attend Fort Lewis College as a cyclist with FLC Cycling. As a collegiate athlete, she won over 35 national medals between across Track, Mountain, Cyclocross, and Road disciplines. In 2011, she qualified for the Kowalski’s Markets Collegiate All-Star team.

After graduation, Missy began training as a track sprint athlete, moving to Los Angeles, California. After 8 months, she as named one of two sprint female athlete to represent Team USA at the Pan Am Championships, where she set a US National Record.

Since then, she has been a resident at the OTC in Colorado Springs, has competed in over 12 countries, won 6 elite national titles, set multiple track and national records, and won a UCI track world cup medal in Cali, Colombia. She was part of four Pan American Championship teams, three track world cups, and also competed as the first US woman at a world championship in over 8 years, in 2015 in Paris France. She continued to remain the #1 ranked US sprint female between 2013-2016. She is an experienced road, track, and cx rider across the junior, collegiate, and elite level.

Missy has an incredible attention to detail, and a passion for working with junior and female athletes. She holds a Bachelor’s of Exercise Science from Fort Lewis College in 2012, and has been a USAC licensed coach since 2015. She is a certified bike fitter with ERO Sports.