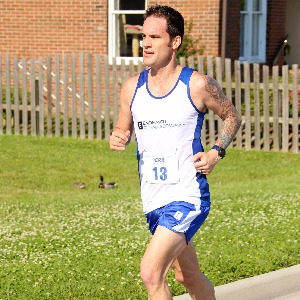 We are committed to providing runners with the attention and Running Coaching expertise that is needed to help you reach your goals. We measure our success in the smiles, laughter, and accomplishments of those we are honored to coach. All running coaches at Endeavor Running Company are RRCA certified. They have been trained to work with an intelligent training plan based on science to help you achieve your goals while reducing risk of injury.

Rob started running when he was 14 years old. He quickly learned he had a gift for running when he became a high school track star by winning countless races. Rob excelled in the 1600 meter and 800 meter events as well as in Cross Country.
After high school Rob stopped running as he began to focus on building his career and starting a family. Life became even busier as his career advance and after the birth of his 2 children. In 2011, Rob knew he had to make serious lifestyle changes if he wanted to be a good example for his wife and children. During this time, he turned to running and rediscovered his passion for the sport he loved as a teenager. The last 6 years have been an adventure for Rob including losing 55 pounds, one ankle surgery, a Boston Qualifier, and becoming one of the top Master runners in the Hampton Roads Area.
An endurance coach since 2012, Rob Hunter has worked with runners training for a 5k up to the Marathon. He has a realistic approach to training to accommodate any lifestyle. Coach Hunter enjoys working with runners from beginner to advanced and even some professionals. His training plans are based on science and designed to fit your current lifestyle to maximize the time you spend training. He measures his success in the smiles, laughter, and accomplishments of those he coaches. Coach Hunter offers one-on-one coaching, distance/virtual coaching, and free consultations.