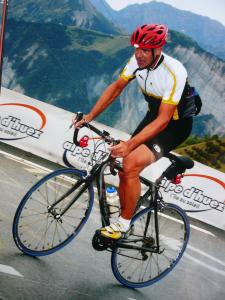 Eric Gauthier EG Multi-Sport Coaching
Have a Question? - Contact Me Contact Me
Coach Summary Meet Your Coach Contact
Coach Summary
Refund Policy
Plans are protected by our Refund Policy and may, with the author's approval, be exchanged for a plan of equal value from the same author.
Location

I am a full-time triathlon coach and train recreational to elite-level athletes. All triathlon distances, criteriums, Time Trials, and running distances.

I coach athletes locally as well as worldwide, with athletes currently in Europe and Asia.

My coaching approach is totally personalized and organized around your personal and professional constraints.

I also organize biking trips to France, including riding the major Tour de France climbs, and discovering the Provence region.

I have been doing triathlon since 1988, all distances from Sprint to Ironman.

I have been coaching triathletes, cyclists and runners since 2007, from beginners to age group winners, and athletes qualifying for national and world championships.

I apply scientifically driven and proven approaches, where science can be combined with pragmatic experience to develop customized, optimum training plans while taking into consideration individual capabilities, family constrains and work schedules. Nutrition and strength training are included as well. I have a 100% success rate at training athletes compete at the Ironman distance and had athletes complete their first 5K marathon race, first sprint triathlon, or winning their age group.

In 2014, I won the US national aquabike championship at the 1/2 Ironman distance.

As a cyclist, I am a time-trial specialist. I have also ridden all the major hors category climbs in the French Alps and Pyrenees, including Aubisque, Tourmalet, Peyresourde, Luz Ardiden, Glandon, Croix de Fer, Telegraphe, Galibier, Mont Ventoux, as well as the infamous Alp d'Huez climb. Once in a while, I also enjoy racing criteriums.

I also do mountaineering.