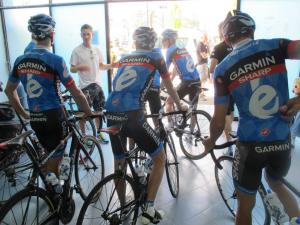 $250 per month paid on the first of every month for daily workouts provided to you in Training Peaks created by Chann McRae. Bi weekly email feedback, power analysis, and one tel. call per week of 15 min.

BioChann, the 2002 US Pro Road Race Cycling champion, is a veteran international competitor who has ridden with Mapei and later with the US Postal Service team. Career highlights include top placements in the World Road Race Championship (5th and 8th, respectively, in 1999 and 2000), as well as strong rides in the Vuelta a Espana and Giro d'Italia. Chann's distinguished cycling career was preceded by triathlon, where he turned in a strong performance at the Junior National Championships at age 17. In 2002, he returned to the sport, winning the Ironhead Dallas Triathlon, and then finishing 85th at the Hawaii Ironman World Championships with minimal preparation. From this point forward, he plans to place heavy emphasis on his newfound passion for coaching cyclist and triathletes.

The thrill that accompanies personal athletic achievement began to stir within Chann McRae during his middle school years when he started competing in cross-country, track, and swimming events.