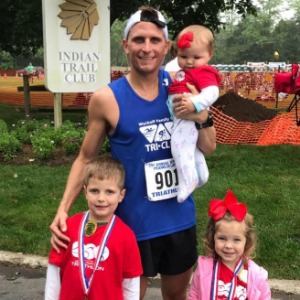 Bryan McDonnell Achieve Multisport Coaching
Have a Question? - Contact Me Contact Me
Coach Summary Meet Your Coach Contact
Coach Summary
Refund Policy
Plans are protected by our Refund Policy and may, with the author's approval, be exchanged for a plan of equal value from the same author.
Location

As a father of three, I know how difficult it is to find time to train with a family and all of life's other obligations. I strongly believe that quality is much more important than quantity. I can design specific training for you based on the athlete you are today and the athlete you want to be. I will help you ACHIEVE your goals!

I completed my first sprint triathlon in 2004 (on a mountain bike!) and took off from there. I went on to race competitively for the next eight years completing countless races from sprints through full Ironman distances.

I began my coaching career as the Master’s swim coach at the Wyckoff YMCA in 2008. That led to the creation of the Y Tri Club in 2009, which has helped over one hundred athletes in its seven years. Many of those participants were beginners who continue to race at various levels today.

In 2009 I also began coaching the swim team at Indian Hills HS. In my time with the program, I have guided our swimmers to setting 22 out of the 24 school records along with helping our teams reach the state tournament for the first time. I was named North Jersey Boys Coach of the Year in 2016 along with being named division coach of the year in 2017, 2016, 2015, and 2010.

In the fall of 2010 I began coaching with the Indian Hills cross country team. In my six years we have won state sectional titles five out of the last six seasons, won multiple league and county championships, and won our school’s first state championship in the fall of 2015. Our team was also named North Jersey Team of the Year in 2013 and 2015 and finished 2015 ranked 6th in New Jersey.

Now I have the privilege to work with individuals to help them reach their goals. I am currently working with athletes who are looking to improve providing motivation, instruction, and guidance along the way.