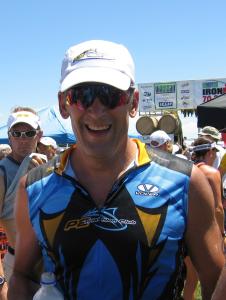 Steve Shumway Mentor Multisport
Have a Question? - Contact Me Contact Me
Coach Summary Meet Your Coach Contact
Coach Summary
Refund Policy
Plans are protected by our Refund Policy and may, with the author's approval, be exchanged for a plan of equal value from the same author.
Location

Steve is an experienced amateur endurance athlete, having successfully competed in three Ironman triathlons, including Ironman Hawaii. His athletic resume also includes numerous other endurance events, such as XTerra off-road triathlons, the Triple Bypass , and the Pikes Peak Ascent and Marathon. In addition to his certification from ACE as a Personal Trainer, Steve also holds coaching certifications from USA Triathlon and USA Cycling.

After leaving the computer software industry, Steve started his career in the fitness profession as a Spinning™ instructor and became interested in the field of personal training and coaching after completing his first Ironman in 2007. “I found the race and the whole Ironman experience incredibly inspirational. If you had told me in 2001 when I did my first sprint-distance triathlon that I would someday do an Ironman, I would have said you were crazy. I think people are capable of much more than they give themselves credit for.”