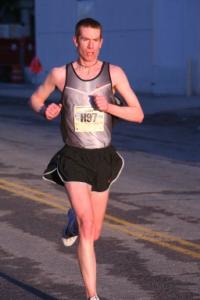 As a coach, I provide endurance training designed around your lifestyle, athletic history, goals and budget. l work with endurance athletes of all abilities and distances to help them reach their goals. Please contact me for a free consultation.

I have been an endurance athlete for over 20 years. I started with running local road races (5Ks and 10Ks). After several successful seasons, I decided I wanted a new challenge and “moved up” to marathons. I have since completed more than 10 marathons including Boston, Chicago, New York and CIM and have a 2:48 PR.

Desiring another challenge, I “moved over” to triathlon and applied many of the same endurance training principles I learned in running across the three (3) disciplines (swim, bike and run). I felt I had a successful transition (pun somewhat intended) when I became an Honorable Mention All American triathlete.

The next challenge I set for myself was coaching. To start, I coached myself as well as some friends & family to various PRs and new levels of fitness. In 2010, I obtained my USAT Level I Coaching Certification, and I am now coaching age groupers of all abilities and spreading the word about good health.

To hire Max Spradley as your coach, select the coaching service that is right for you.